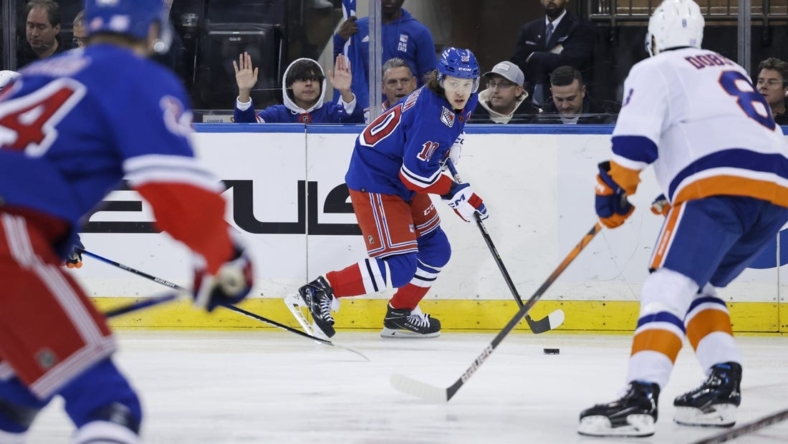 Anders Lee scored with 5:30 remaining in the third period as the New York Islanders rallied for a 4-3 victory over the host New York Rangers Tuesday night.

The Islanders won for the seventh time in eight games (7-1-0) and beat the Rangers for the second time this season by pulling off their second straight third period comeback and fifth comeback win overall.

Lee gave the Islanders a 4-3 lead by putting a backhander into the net after getting the rebound of his own shot and shortly after Rangers defenseman Jacob Trouba committed a giveaway by the half-wall near the right circle.

Adam Pelech and Brock Nelson started the Islanders’ comeback by getting goals — Nelson’s on a power-play — after power-play tallies by Chris Kreider and Vincent Trocheck in the second staked the Rangers to a 3-1 lead.

Pelech drew the Islanders within 3-2 by blasting a shot from the high slot by Rangers’ goalie Igor Shesterkin’s stick 14 seconds into the third. Nelson tied with 7:14 left by sending a slap shot from the left circle into the net.

Kyle Palmieri scored an early power-play goal as the Islanders improved to 7-2-0 in their past nine trips to Madison Square Garden.

Filip Chytil scored in the opening period for the Rangers, who are on their second three-game losing streak this season.

Shesterkin stopped 22 shots and dropped to 1-6-1 lifetime against the Islanders.

After Palmieri lifted in a rebound 6:04 into the first period, the Rangers scored three straight for a 3-1 lead.

Chytil tied the game a little over five minutes after Palmieri’s goal by putting a wrister over Varlamov from between the circles.

Kreider finished off a 2-on-1 with Artemi Panarin 22 seconds into the second and nearly scored again midway through the period but his deflection rang off the post. Kreider also seemed to score with 7:54 left when his deflection appeared to go over the goal line but after a lengthy review, officials determined he did not score.

New York took a two-goal lead with 6:13 left when the rebound of Panarin’s slap shot caromed off Islanders’ defenseman Scott Mayfield’s skate in front and Trocheck backhanded the loose puck by Varlamov while falling to the ice.