Islanders can show they were listening while facing Sabres 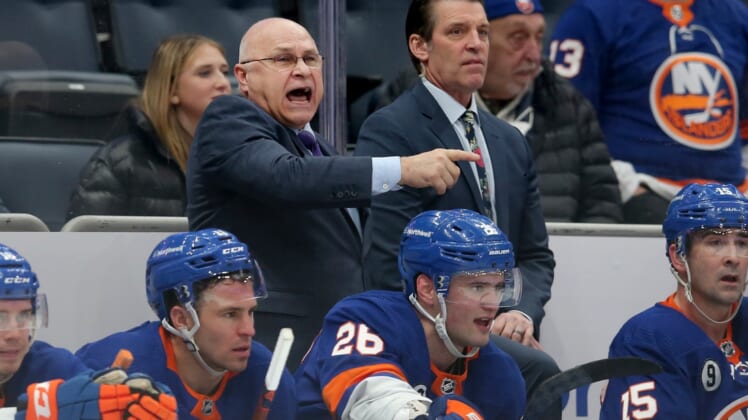 On Thursday night, the New York Islanders looked like a team feeling the effects of an unrelentingly difficult season.

On Saturday afternoon, Islanders head coach Barry Trotz will be out to see if his harsh words following a disappointing effort had any effect on the listless team.

A pair of Eastern Conference teams playing out the string are slated to oppose each other for the final time Saturday, when the Islanders visit the Buffalo Sabres.

Both teams were off Friday after playing Thursday, when the host Islanders fell to the New York Rangers 6-3 and the visiting Sabres earned their third straight win with a 5-2 victory over the New Jersey Devils.

The loss was the third straight for the Islanders (35-32-10, 80 points), who are down to the final five games in a season they’ll hope to never experience again. In addition to the on-ice disappointment, the club has mourned the deaths of three franchise icons — Clark Gillies, Jean Potvin and Mike Bossy, the latter of whom died April 15.

The Islanders went as far as the Stanley Cup semifinals in each of the last two seasons, but their hopes of reaching the Stanley Cup Finals are long gone. The last time the team was there was in 1984 when Gillies and Bossy led the charge.

This season’s hopes essentially crashed during an early-season 11-game losing streak when a COVID-19 outbreak tore through the locker room. Another outbreak has returned with club announcing just before faceoff Thursday that center Jean-Gabriel Pageau, associate coach Lane Lambert and assistant coach Jim Hiller were placed into protocol.

The Islanders’ last three losses have come against the Rangers, Florida Panthers and Toronto Maple Leafs, all of whom will be among the favorites to emerge as the Eastern Conference’s representative in the Stanley Cup Finals.

But Trotz didn’t think the caliber of competition had much to do with the lopsided loss Thursday, when the Rangers’ Andrew Copp produced a natural hat trick barely 18 minutes into the game.

“It is a game of mistakes, but if you make a mistake, you have to have the urgency and the desire to clean up your own mistakes,” Trotz said. “If you’re going to create some garbage on the ice, then you better clean it up, and we didn’t do a good job.”

The Sabres (30-38-11, 71 points) are going to extend their NHL-long playoff drought to 11 seasons, but a late run has provided hope they’re finally beginning a long-awaited turnaround. Buffalo has gone 12-6-3 since March 10.

The Sabres have maintained a third-period lead in each of their last three wins. The Devils closed within 3-2 early in the third Thursday before Owen Power and Jeff Skinner scored to put away the victory.

“I loved our third period because we give up a goal, the first goal of the period, and then the game tightens up and we were pushing each other,” Sabres head coach Don Granato said. “Everybody collectively, we just said ‘Let’s go. Let’s get another. Let’s go after them. We’re not going to sit on a one-goal lead.'”