Islanders break away for second straight win over Blue Jackets 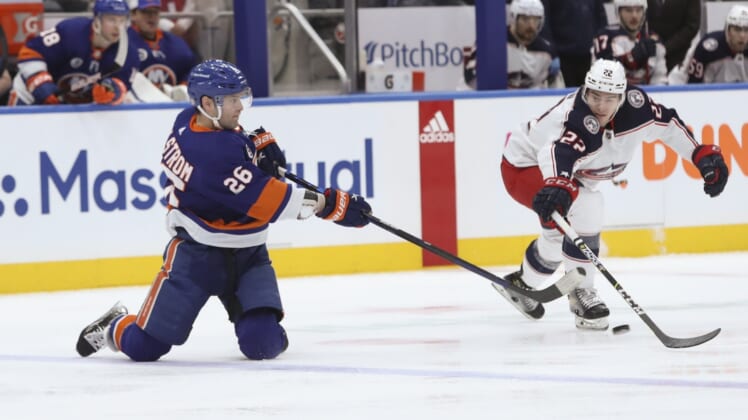 Kyle Palmieri, Mathew Barzal and Ryan Pulock scored in the third period Thursday night for the host New York Islanders, who completed a home-and-home sweep of the Columbus Blue Jackets with a 5-2 win in Elmont, N.Y.

Sebastian Aho and Oliver Wahlstrom scored 11 seconds apart in the first for the Islanders, who beat the Blue Jackets 4-3 in Ohio on Tuesday night. Goalie Semyon Varlamov earned the win Thursday by making 30 saves.

The Islanders have won 10 of 15 (10-4-1) to move ahead of Columbus into ninth place in the Eastern Conference. Both teams have 69 points, but New York has two games in hand.

The Islanders had the game’s first eight shots before Aho and Wahlstrom scored on consecutive chances.

Aho, stationed at the Blue Jackets’ blue line, picked off a clearing pass by Dean Kukan and exchanged the puck with Brock Nelson before firing a shot that clipped off Merzlikins’ glove at the 8:39 mark.

Zach Parise won the subsequent faceoff with Cole Sillinger and Barzal sent a backhanded chip to Parise to begin a 2-on-1 opportunity. With Blue Jackets defenseman Gabriel Carlsson trailing a step behind, Parise dished backwards to Wahlstrom, whose shot sailed past the sprawling Merzlikins.

The Blue Jackets tied the score with their own flurry around the midway point of the second. Varlamov turned back a shot by Brendan Gaunce and Jake Bean’s shot sailed wide of the net before Eric Robinson collected the rebound and backhanded a pass into the crease to Bemstrom. He scored over Varlamov’s stick shoulder 8:47 into the period.

The Blue Jackets tied the score 99 seconds later when Danforth, battling for position in the crease with Noah Dobson, backhanded home a rebound of a shot by Vladislav Gavrikov.

Palmieri broke the tie 3:16 into the third when he fired a shot over Merzlikins’ glove shoulder and into the top of the net. Barzal added an unassisted insurance goal with 10:08 left, when he outraced Gavrikov and Andrew Peeke to a loose puck in the neutral zone and beat Merzlikins on the breakaway.