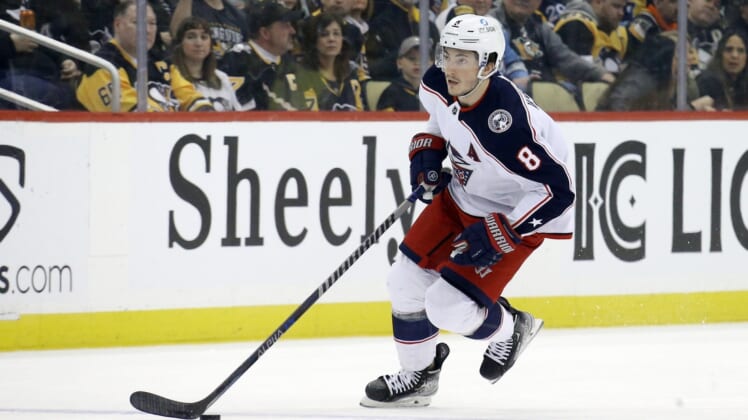 With their playoff hopes all but extinguished, the Columbus Blue Jackets and New York Islanders are nearing the “adding injuries to insult” portion of their seasons.

The two increasingly banged-up teams will begin a home-and-home set Tuesday night in Columbus, Ohio. The Metropolitan Division rivals also are slated to face off Thursday night in Elmont, N.Y.

The Blue Jackets most recently played Saturday, when they completed a winless three-game trip by losing to the Minnesota Wild 3-2 in overtime.

The Islanders lost for the second time in as many days on Sunday, 4-1 to the visiting Tampa Bay Lightning.

The recent skids have made an already long path to the playoffs even more unlikely for the Blue Jackets and Islanders, who are in ninth and 10th place, respectively, in the Eastern Conference and ended Sunday 15 and 19 points behind the second wild card, the Washington Capitals.

The Blue Jackets, who have played the past seven games without captain Boone Jenner (lower-back injury), absorbed two costly injuries during their 0-1-2 trip. Columbus announced Thursday that goaltender Joonas Korpisalo would undergo hip surgery and would miss the rest of the season.

Defenseman Zach Werenski, whose 42 points rank fifth on the team, exited Saturday’s game late in the first period after absorbing a hard hit to his head or shoulders by the Wild’s Jacob Middleton.

The Jackets still had a chance to sweep the season series from the Wild — who are second place in the Central Division — but Minnesota forced overtime when Kirill Kaprizov scored with 1:03 left in regulation and won when Jared Spurgeon scored 1:24 into the extra session.

“I’m frustrated for our guys,” Blue Jackets coach Brad Larsen said. “They played so hard tonight, they really did. I really wanted that win for them tonight, for that group, to feel good about themselves, and they should.”

The Islanders authored a pair of feel-good tales the past two seasons, when they made surprising runs to the NHL semifinals.

But being swept this past weekend by the Boston Bruins and the two-time defending Stanley Cup champion Tampa Bay Lightning provided a reminder of how this season has not gone as planned for New York, which endured an 11-game losing streak from Nov. 7 through Dec. 5.

The Islanders were dealing with their own injuries Sunday. Defenseman Carter Hutton received an emergency recall from Bridgeport of the American Hockey League and played 16:46 in place of Sebastian Aho, whom head coach Barry Trotz said was “nicked up.”

Starting goalie Ilya Sorokin, who was hit in the mask by a puck in each of the first two periods, didn’t play in the third period.

Trotz said he wasn’t sure if Sorokin, who has gone 22-14-7 while becoming the team’s clear no. 1 goalie, would travel to Columbus.

“He’s a guy that can steal you games,” Trotz said. “Every night we feel we match up against their goaltender, no matter who it is in the league.”