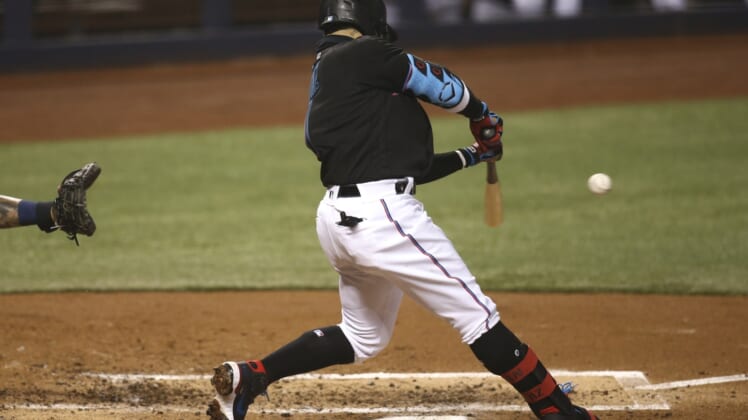 Isan Diaz hit his first career grand slam and the host Miami Marlins tied their season high with their fourth straight win, a 6-1 victory over the Milwaukee Brewers on Friday night.

In addition, Brewers starter Brent Suter (2-2) left after 2 1/3 innings due to a cramp in his right calf. The left-hander allowed four hits, one walk and three runs with two strikeouts

Rookie left-hander Trevor Rogers (4-2) earned the win, allowing four hits, two walks and one run in five innings. He struck out six and lowered his ERA to 1.89.

The Marlins got four scoreless innings from three relievers. Zach Pop and Richard Bleier tossed one inning each, and Adam Cimber pitched the final two.

On Friday, Rojas lined a single to center and advanced on Garrett Cooper’s groundout. Catcher Jacob Nottingham was then charged with a passed ball when he was crossed up on a pitch, and Rojas scored on Adam Duvall’s 100-mph line drive that ate up shortstop Luis Urias, deflecting off his glove.

In the third, Rojas drew a leadoff walk, and one out later, Cooper singled and Duvall walked. Diaz, facing reliever Patrick Weigel, hit a first-pitch fastball to right-center for his seventh career homer since his major league debut in 2019.

Milwaukee got on the board in the fourth as Urias doubled and scored on Pablo Reyes’ single to left.

Rojas started his third rally in the bottom of the fourth. With two outs and none out, Rojas doubled and scored when Jesus Aguilar smoked a ground-ball double down the third-base line, stretching Miami’s lead to 6-1.

Miami had a run taken off the board in the eighth. Duvall doubled and appeared to score on Diaz’s line-drive single despite a great throw home by center fielder Lorenzo Cain. However, on video review, it was shown that Nottingham tagged Duvall in time for the out.

Milwaukee’s first two batters reached in the ninth, but Cimber got the next three batters, including catching Nottingham looking to end the game.