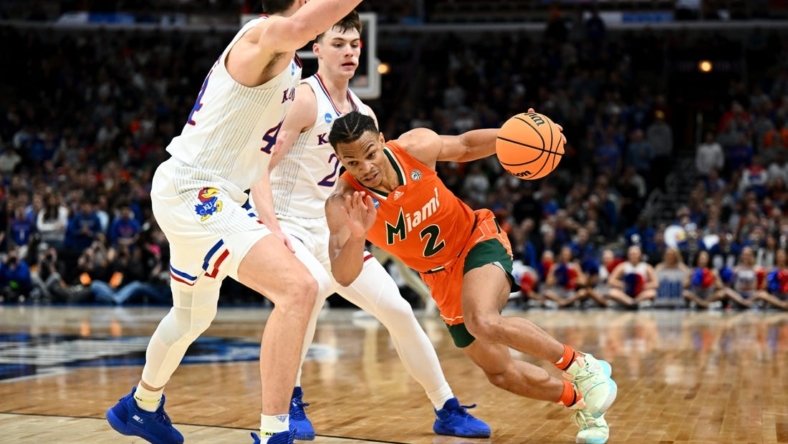 Miami, picked to finish fourth in the ACC, will open its 2022-2023 season on Monday against visiting Lafayette.

That fourth-place prediction is tied for the highest in program history, matching the 2017-18 team that ultimately finished third.

Hurricanes guard Isaiah Wong has been named a preseason first-team All-ACC player for the second consecutive year, a feat never before accomplished by a Miami player.

Wong, who averaged 15.3 points last season, is one of two returning Canes starters. The other is Jordan Miller, who with Wong helped Miami reach the Elite Eight of the NCAA Tournament last season in another first in school history.

Miami is also expected to start Wooga Poplar, who was a reserve last season, and transfers Norchad Omier (Arkansas State) and Nijel Pack (Kansas State). All five of those players scored in double figures in Miami’s lone preseason game, an 89-55 win over Division II Indiana University of Pennsylvania.

Pack, an elite shooter, should rival Wong for the team scoring lead. Omier and reserve forward Anthony Walker are among Miami’s top rebounders, and Miller is a veteran “glue” guy who does a bit of everything, including leading the team with 5.9 rebounds in 2021-22.

Lafayette, set to open its 113th season, is coming off a disappointing 10-20 year.

Aside from Miami, the Leopards will play Penn State, St. John’s, Saint Joseph’s, Drexel and La Salle — all on the road — in a daunting nonconference schedule.

“I know this will be a huge challenge for us,” first-year Lafayette coach Mike Jordan said. “But I have confidence in our young men.”

Lafayette also returns Kyle Jenkins, who scored a season-high 18 points against Duke and averaged 10.5 points for the season, and Leo O’Boyle, who averaged 9.9 points. Jenkins and O’Boyle are both 6-7 forwards.