Isaiah Thomas’ injury increases chances he returns to the Lakers 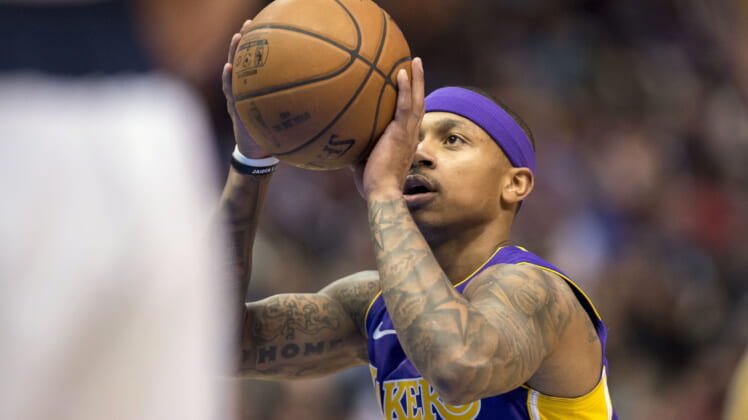 The Los Angeles Lakers on Thursday announced that Isaiah Thomas will miss the next four months after undergoing surgery on his ailing hip. Given that previous reports suggested this might be the case, it’s really not too much of a surprise.

An impending free agent, Thomas averaged 15.6 points and 5.0 rebounds in 17 games with the Lakers following a trade from the Cleveland Cavaliers back in February. As part of that deal, the Lakers wanted to add Thomas’ expiring contract in order to put themselves in position to fit two max free agents under the cap this coming summer.

In reality, it looked like Thomas was nothing more than a rental in exchange for the Cavaliers taking on the long-term contracts of Larry Nance Jr. and Jordan Clarkson. A former MVP candidate with the Boston Celtics, Thomas seemingly didn’t fit into the Lakers’ future.

Now, with Thomas’ current injury taking him through the start of free agency in July, there’s a darn good chance the veteran is going to have to take a smallish short-term deal to prove his worth next season. It’s in this that the possibility of him returning to the Lakers is better now than ever before.

There was always a question about Thomas’ fit with rookie Lonzo Ball in the backcourt. That’s not necessarily going to change should Thomas in fact decide to re-sign with the Lakers. In no way does this mean it can’t be worked out.

Los Angeles’ primary targets in free agency will be All-Star forwards LeBron James and Paul George. That’s already known. If the team is able to land one or both of these players, the team’s frontcourt will be set. Add in youngsters Kyle Kuzma and Brandon Ingram to the mix, and that’s taken to a whole new level.

Assuming for a second that the Lakers want Ball to be their primary ball handler moving forward (they do), could Thomas fit in as an off-ball guard who goes toe-to-toe with the opposing team’s point guard on the other end of the court? It’s definitely an intriguing situation to look at.

What we do know is that Thomas is no longer looking at a lucrative long-term deal this summer. Financially, the Lakers could potentially bring him back while adding a couple big fishes in free agency. Whether that happens remains to be see. But it’s more possible now than it was when the Lakers initially acquired the former All-Star back in February.