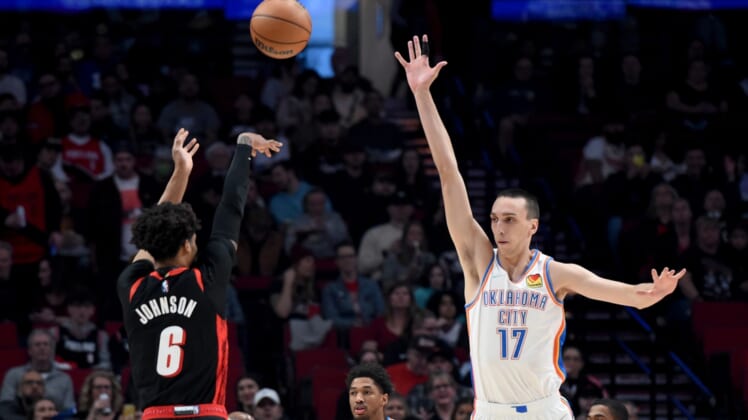 Isaiah Roby scored seven of his career-best 30 points in overtime and also forced the extra session with a 3-pointer to lead the Oklahoma City Thunder to a 134-131 victory over the host Portland Trail Blazers on Monday night.

Roby shot 11 of 13 from the field, matched his career high of four 3-pointers and collected eight rebounds as the Thunder won for just the second time in the past 13 games.

Aaron Wiggins added a career-best 28 points and Theo Maledon had 23 points and 10 rebounds for Oklahoma City (22-53).

Ben McLemore matched his career high of eight 3-pointers and equaled his season high of 28 points for Portland, which lost its fourth straight game and fell for the 14th time in 16 outings.

Roby buried a 3-pointer with 5.4 seconds left in regulation to knot the score at 115 and force overtime.

Roby later scored all of Oklahoma City’s points in a 7-2 run to give the Thunder a 128-124 lead with 50.3 seconds left in overtime, and the visitors held off a Portland charge.

The Trail Blazers connected on 45.5 percent of their field-goal attempts, including 20 of 50 from 3-point range.

Portland led 93-83 after Dunn’s basket with 10:45 left in regulation before Oklahoma City scored the next eight points to move within two.

Eubanks made consecutive baskets to boost Portland’s lead to 113-105 with 2:45 left. However, the Thunder finished regulation with a 10-2 burst.

McLemore (16 first-half points) and Williams (15) each made four 3-pointers before the break as the Trail Blazers built a 61-58 lead.

Wiggins’ tip-in with 6:23 remaining in the third quarter gave the Thunder their last lead of regulation at 71-70.

McLemore made three 3-pointers in the final 4:10 of the period as the Trail Blazers took an 89-81 advantage into the fourth quarter.