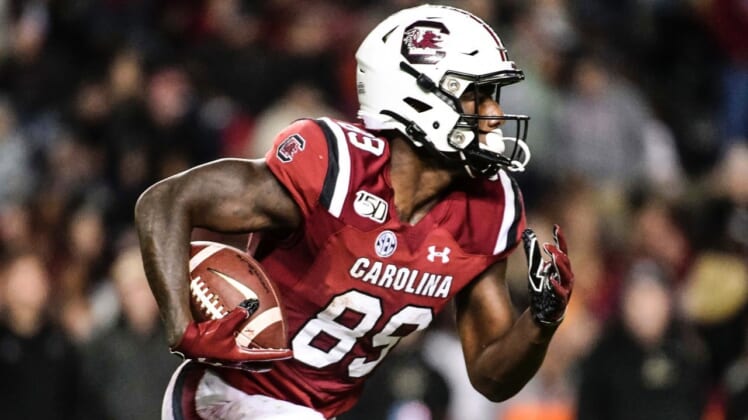 There’s no doubting when healthy wide receiver Tyrell Williams is a great offensive weapon. But have the Las Vegas Raiders already planned on his successor with the drafting of South Carolina’s Bryan Edwards?

Las Vegas Raiders wide receiver Henry Ruggs III has drawn most of the attention among the Las Vegas Raiders offensive rookies with good reason: he’s the No. 12 overall pick who’s an instant turbo boost to the offense. With that said, some personnel people within the organization may tell you the team picked up two first-round talents at wide receiver with the other being Bryan Edwards.

According to Adam Caplan of Inside the Birds, the Raiders saw Bryan Edwards as a first-round prospect.

“Edwards doesn’t figure to have much of a role this season, but he was drafted with the belief that he could start down the line,” Caplan wrote. “And the Raiders were one of many teams that felt he was a first-round talent just based on tape study, but his injury history dropped him down draft boards.”

Over the last seven months, Bryan Edwards had a knee scope for a torn meniscus and then broke his foot in preparation for the NFL Scouting Combine. On the other hand, he had a solid four-year run at South Carolina, hauling in 234 receptions for 3,045 yards and 22 touchdowns.

Edwards’ recent injuries likely explain why he fell to the Raiders in the third round. Caplan also writes the team expects the rookie wideout to eventually take over the “X” position as an outside complement to Ruggs, who’s the projected “Z” receiver.

While this outlook sounds good for Edwards, Tyrell Williams’ future with the Raiders seems cloudy at best. The veteran wideout scored a touchdown in his first five contests as a Raider, but he missed two games because of plantar fasciitis in 2019.

At 6’3″, 212 pounds, Edwards has the comparable size to Tyrell Williams, who’s listed at 6’4″, 205 pounds. The rookie could win one-on-one matchups and haul in contested catches. He can also use his physical strength to free himself at the top of routes.

Williams spoke to The Athletic’s Vic Tafur about the condition of his feet.

“Shoot, it’s been a long offseason with my feet. I did two months after the season of just rehab and resting them. It was still taking a long time and I started getting pretty discouraged, but … um, about two months ago, I finally got over the hump and my feet have been feeling good. So I still feel it a little bit, but compared to what I had … it’s nothing compared to what I was going through during the season.”

Tyrell Williams admitted he still has some discomfort, but he’s made significant progress in the healing process. Perhaps the sixth-year veteran benefits from another month off before training camp.

Yet Williams’ gradual recovery seems a bit troubling since teams will likely push players to their limits in the summer after going through the spring without an on-field practice. We could see a lot of Zay Jones if Williams needs more time to recover from his foot ailment.

Based on Caplan’s sources, the Raiders could have a tough decision at wide receiver. If Williams bounces back for a strong 2020 campaign, he could justify his $11.6 million cap hit next season, which would put Edwards on hold.

Then again, the Raiders can still move on from Tyrell Williams and go with a cheaper option to save money. In that scenario, the team would recoup all of Williams’s 2021 salary.

According to ESPN’s Adam Schefter (h/t Reuters), teams could see a $30-$80 million salary-cap reduction due to loss of revenue from limited capacity in stadiums as venues take precaution with the coronavirus pandemic. As a result, general managers would need to spend wisely and possibly cut bigger contracts. With Bryan Edwards on the roster, Williams likely becomes expendable at his pay grade.

For now, we should pump the breaks on the outlook of the Raiders’ 2021 three-wide receiver set, though Bryan Williams may have to view this upcoming term as a contract year because of the depth at the position and potential cuts across the board.

At 6’3″, 212 pounds, Bryan Edwards has the comparable size to Williams, who’s listed at 6’4″, 205 pounds. The rookie could win one-on-one matchups and haul in contested catches. He can also use his physical strength to free himself at the top of routes.

At least initially, Bryan Edwards isn’t going to provide chunk plays with a consistency like Tyrell Williams, who averages 16.1 yards per catch for his career. The South Carolina product flashed as more of possession chain-mover on the collegiate level, averaging 13 yards per reception.

After the Raiders struggled with a shortage of talent at wideout last year, fans should embrace a potential competition for the “X” receiver spot. As of right now, Tyrell Williams and Bryan Edwards have to focus on recovery from their foot injuries. Perhaps we’ll see a full dose of the veteran while the rookie absorbs the game as mostly an observer in 2020.