Is the COVID-19 Doom and Gloom a Reality for the NFL and the Las Vegas Raiders? 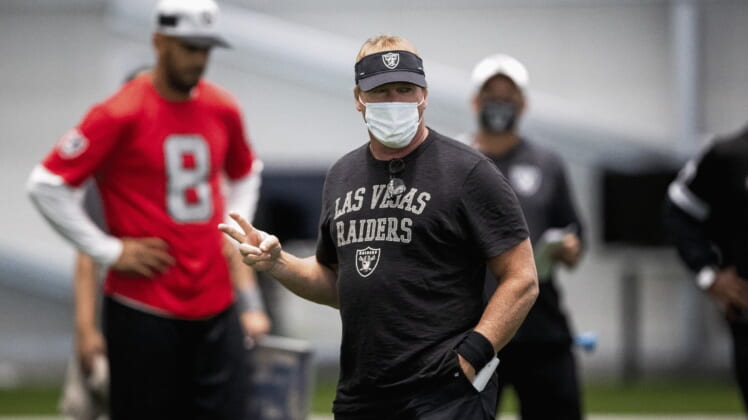 Is the NFL and the Las Vegas Raiders first season in their new home headed to a COVID-19 shutdown or are doomsayers overreacting?

As we continue to live through the most disruptive cultural upheaval of our lifetime, the return of sports is a welcome distraction. Despite that, the COVID-19 tentacles don’t spare the world of sports of worry, stoppage and specter of another shutdown. Even so, disturbing views from media and fans alike seem to be making a very difficult situation even worse.

This week we learned 14 members of the Miami Marlins of Major League Baseball tested positive for the coronavirus halting their restarted season. It led to canceled games and yet more uncertainty.

Will the Marlins be able to field a team for the remainder of the team’s shortened 60-game season? And if it can’t, does that mean baseball and possibly other sports, like the NFL, must alter their plans to forge ahead?

For the Las Vegas Raiders, as part of the NFL, it appears all systems are a go for a return to the field. Players, coaches and even media are being tested and precautions are in place to limit the risk of infection and a shutdown.

No system is perfect and no level-headed thinker believes the NFL and its teams will go unscathed. Players, coaches and media will test positive. For the Raiders, the news has been good as no one has for the start of training camp this week in Henderson.

Even yesterday, talk of the NFL considering some sort of manageable “bubble” to keep players safe and on the field is reportedly not being discussed. Unlike hockey and baseball, roster size and the nature of the sport just don’t lend itself to such ideas.

Still, watching Twitter and comments elsewhere, the Marlins situation seems to convince many the sports world is headed for a shutdown again. Despite over 6,400 MLB tests being negative, and the Marlins so far being the only outlier, many pushed the panic button already. Also, many sports voices are using it as a cautionary tale and warning that the NFL will be a disaster once it gets underway.

They have a point but is the situation that dire? I say it isn’t and perhaps the collective is suffering from some COVID-19 overload.

Like the political landscape these days, there seems to be no one looking more critically at what this all means. There’s no doubt player safety and protocols to limit the spread must be the top priority. Yet so many are prescriptive with all of it and write it off as a foregone conclusion.

The NFL and the style of play certainly are a massive red flag. Baseball doesn’t require anything close to the person-to-person contact that tackle football does. So logically, I see where the doom-and-gloomers are gaining their opinion. These aren’t stupid or uninformed people.

That doesn’t absolve those who believe there is no threat either. For some, the virus isn’t a worry at all. There’s a polarized view of this thing and how it will impact professional football.

The truth tends to always be somewhere in between my apocalyptic brethren and the deniers. Care must be taken and a close eye must be kept to protect players, coaches and fans.

It might be advisable to take a methodical and reasoned approach to any outbreaks or positive tests. We mustn’t demonize players who opt-out for personal reasons and those players decisions, and for future players, coaches, or media who test positive, we don’t have to look at that as the end of the world or of football’s chance to carry on in 2020.

I believe fans won’t be part of the equation in 2020. If that helps keep players and staff isolated enough to make sure we get a complete season in 2020, isn’t that worth it?

It’s a hard pill to swallow for Raiders fans and the organization who spent the past five years making the move to Las Vegas a reality. Still, let’s keep an optimistic but cautious view of the 2020 season as the team begins training camp.