Is Steve Kerr one of the greatest coaches in NBA history? 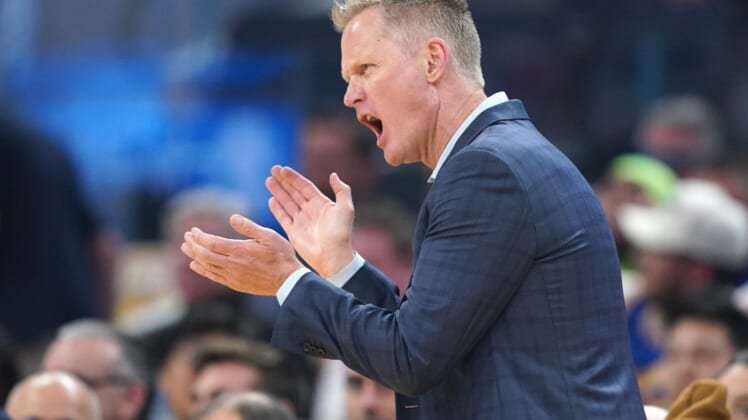 Steve Kerr has been a head coach for five seasons. But in those five years, he’s won countless accolades and played an integral role in creating a Golden State Warriors dynasty that every NBA organization envies.

The big picture: After leading the Warriors to three championships in five years and breaking numerous records, is Kerr one of the greatest coaches in NBA history?

Kerr was a Sun before a Warrior

Across 15 seasons in the NBA, Kerr learned from some of the best mentors imaginable. During his years with the Chicago Bulls and San Antonio Spurs, Kerr spent countless hours learning from two of the NBA’s greatest coaches in Phil Jackson and Gregg Popovich. Kerr knew his role and he played it perfectly. While he only started in 30 of his 910 games, with 29 starts for the Cleveland Cavaliers, Kerr hit timely shots from all over the floor whenever his number was called.

Kerr became the general manager of the Phoenix Suns in 2007 and he made a meaningful impact on the organization:

After three years with the Suns, Kerr spent the next few years as a commentator. Soon, Kerr made it known he was ready for a return to the NBA.

At first, the New York Knicks were destined to sign him based on his relationship with then-president Jackson. But after a low-ball offer, the Golden State Warriors swooped in and hired Kerr to lead them into the future.

The Warriors gamble paid off

While the Warriors made the playoffs the previous two seasons before Kerr’s hiring in 2014, the ownership group felt it best to fire head coach Mark Jackson. Joe Lacob – an owner of the Warriors – claimed Jackson had a poor relationship with the rest of the organization. Thus, paving the way for the Kerr hiring.

For his efforts, Kerr won Coach of the Year and became the first person in NBA history to be part of a 70-win team as a player and coach. He’s also the first head coach in NBA history to lead his team to 67 or more wins in three straight seasons. Lastly, he already boasts the third-most wins (337) in team history behind Al Attles (557) and Don Nelson (422).

Greatest coaches of all time ahead of Kerr

With Kerr’s incredible success in such a short period, it’s important to recognize those that came before him. Playing under Jackson and Popovich influenced Kerr’s coaching principles. While the conversation of who is the greatest coach of all time is subjective, there are a few coaches ahead of Kerr:

Considering Kerr’s immense success in a short span, it’s possible to see Kerr pass some of the aforementioned coaches. Though winning nine more championships to beat Jackson might be out the question for Kerr, it will be fascinating to see where he goes.

The bottom line: Kerr will be one of the greatest coaches the NBA has ever seen.

By taking all the coaching principles he learned and instilling those to his team, Kerr changed the game. More and more teams are taking notice of the “three-point” revolution Kerr and the Warriors popularized.

His ability to relate to Curry and Thompson is vital as well. His ability to talk with his players, particularly asking Andre Iguodala to come exclusively off the bench, is unmatched. As a result, the Warriors created the vaunted “Death Lineup,” running roughshod on the league for five years.

Although Kerr had the luxury of coaching Kevin Durant as well, his capacity to manage player egos and focus on the bigger picture along with his accolades already has him in the running as one of the greatest coaches in NBA history.