Is Pierre McGuire going to be the next Coyotes GM? 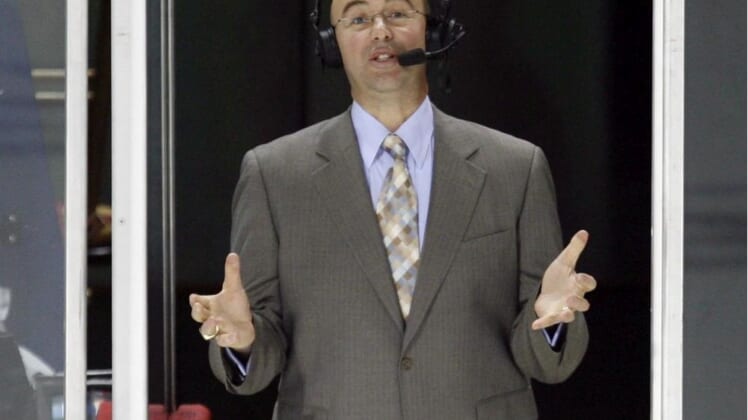 TSN hockey analyst Pierre McGuire speaks to a television camera prior to the game between the Montreal Canadiens and Chicago Blackhawks Tuesday, January 8, 2008 at the Bell Centre in Montreal. (THE GAZETTE/John Kenney)

Pierre McGuire back in the NHL as an executive? Yes, it could happen and with the Arizona Coyotes based on some recent reports. “An interesting name surfaced this week, and that’s Pierre McGuire,” Sportsnet’s Chris Johnston said on a recent broadcast with regard to the Yotes GM search.

Pierre McGuire has some experience

While many television viewers are hoping he gets the job, the 59 year-old is still appearing on NBC Sports broadcasts. The chances of him landing the post is decent as McGuire isn’t just a talking head and has experience with several different hockey operation roles.

He served as a scout and assistant coach with the Penguins in the early 90’s. His success with Pittsburgh made him an assistant general manager with the Hartford Whalers. Unfortunately, things went really bad in Hartford when then coach and GM, Paul Holmgren gave McGuire the head coaching job so he could concentrate on his GM duties.

At the time, Pierre was one of the youngest NHL coaches at only 32 years of age. He didn’t last a year on the job before being fired and considered one of the most disliked people in the Whalers organization. Upon his firing, star forward Pat Verbeek said it was the best move for the organization.

McGuire was considered emotional, pompous and arrogant. Even though he was more than 10 games under .500, McGuire was heard saying how he out-coached the opposition. In a report that ran in the Hartford Courant in 1994, it read:

Many times he privately said after a game how he outcoached the other guy. But it was something never really made public until May 3, when McGuire proclaimed that no coach in the NHL “can outwit me.” That quote ran in The Hockey News and raised eyebrows all over the NHL.

Former Coyotes goalie also up for the job

Another interesting name to come up for the job is former goaltender, Sean Burke. He played 5 years in the desert and knows the organization and city well. Burke also comes with some recent experience as Hockey Canada’s GM from 2016-19. Oddly enough, Burke was McGuire’s goaltender during that awful season in 1993-94.