Is Kolton Miller Primed for a Third-Year Leap? 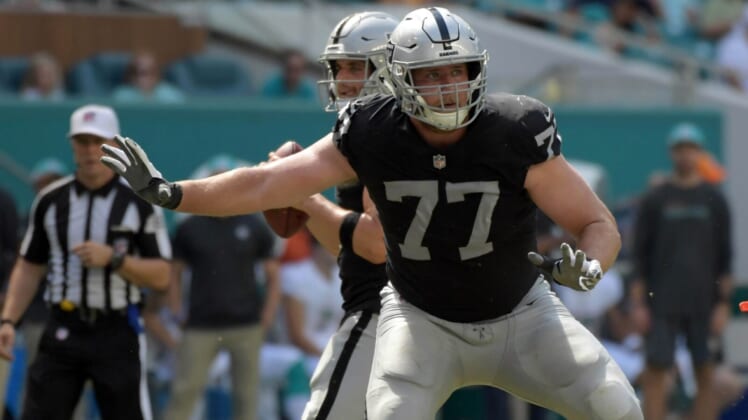 After being sharply criticized for drafting Kolton Miller early in the 2018 draft, the Las Vegas Raiders saw a significant return on their investment in 2019 as the second-year player made great strides. Will the same be true in 2020?

An offensive line can make or break a quarterback who’s not accustomed to using his legs while under pressure. Last offseason, head coach Jon Gruden encouraged Derek Carr to move the pocket and left tackle Kolton Miller made significant strides during the regular season, which bodes well for the offense.

With three Pro Bowlers, a six-year starter in Gabe Jackson and Miller’s improved play on the offensive line, the Raiders’ five-man unit remains one of the best in the league.

According to Football Outsiders, the Raiders ranked sixth in run and pass blocking in 2019. Three of their offensive linemen missed at least four games. Miller suited up for all 16 contests—a positive sign after he suffered a season-ending injury during his redshirt sophomore year at UCLA and dealt with an MCL sprain throughout his rookie term.

Despite his push through injuries, Miller drew criticism for a rough first year. In the following offseason, he added weight and strength to handle the rigors of the pro game, which paid off.

In 2019, Kolton Miller held his own against top pass-rushers, though he still has room to grow going into his third campaign. Because of his glaring struggles while hampered with an injury, he couldn’t have looked much worse when healthy. With that said, the 2018 first-rounder cut down on penalties, sacks and hurries allowed, per Pro Football Focus.

Kolton Miller’s progress has generated some buzz among the Raiders coaches, per Vic Tafur of The Athletic:

With heightened expectations, Miller will find out what the Raiders think of his first three years at the end of the 2020 campaign when the team has to make a decision on his fifth-year option. For now his offensive line coach Tom Cable seems to have the utmost confidence in the young tackle after a fight through early-career adversity, per Matt Kawahara of the San Francisco Chronicle.

“It’s hard, what he went through,” Cable said. “And you’re getting scrutinized at that position because you’re there on the edge and everybody sees whatever mistake happens. But I think it also kind of hardened him. It grew him up a little bit. And this year, he has been able to handle adversity, whether it’s in the game, a nick here and there, whatever it is.”

At the end of the 2019 term, Miller talked about his technical faults that put him in precarious positions against stronger pass-rushers, per Kawahara.

While a Pro Bowl nod sets a high bar, Miller doesn’t need to play like an elite tackle to solidify the Raiders offensive line, though that’s an ideal scenario. He must focus on tightening up his pass-blocking sets.

“I got caught a lot of times off balance or not stable with footing,” Kolton Miller said. “Last season, I would open up, and when you get caught with a one-handed bull (rush) on the inside, it brings up your inside leg so you’re stuck in a bad spot. So being able to kick my stance a little bit more, when bull rush happens, I’m able to sit and be in a good spot.”

Looking back at the last 16 contests, Miller didn’t just grow in his size. He made subtle adjustments to his footwork and kept his base. He went one-on-one against breakout edge-rusher Za’Darius Smith in Week 7 and stifled him on multiple occasions.

Brandon Thorn of Establish the Run captured one play that showed Kolton Miller’s smooth lower-body mechanics while mirroring Smith on a passing down:

Remember, guard Richie Incognito lines up on same side as Miller. The grizzled veteran’s mean streak may have rubbed off on his young teammate in one sequence against former Raider Denico Autry:

Coming out of UCLA, Kolton Miller garnered praise for his athleticism. He recorded top-three marks among offensive tackles in the 40-yard dash (4.91 seconds), vertical leap (31.5 inches), broad jump (121 inches), 20-yard shuttle (4.49 seconds) and three-cone drill (7.34 seconds). Now, with added strength, the 24-year-old can put the full package together for further progress in 2020.

While a Pro Bowl nod sets a high bar, Miller doesn’t need to play like an elite tackle to solidify the Raiders offensive line, though that’s an ideal scenario. He must focus on tightening up his pass-blocking sets.

In addition to Von Miller, Bradley Chubb, Joey Bosa, Melvin Ingram and Frank Clark within the AFC West, Miller could see New Orleans Saints’ Cameron Jordan, Cleveland Browns’ Myles Garrett, the 2019 sack leader Shaquil Barrett and his Tampa Bay Buccaneer edge-rushing partner Jason Pierre-Paul during the 2020 term. All those players have logged a considerable number of pass-rushing snaps over the left side.

Although Kolton Miller will go up against several high-end edge-rushers, that’s not an excuse to turn in a subpar performance for the upcoming term. On the flip side, if he claims a spot on the 2020 Pro Bowl roster, the third-year tackle certainly earned it. More importantly, the Raiders would have a strong tackle duo intact for at least another two years with Brown on the other side and under contract through 2022.