Is Jadeveon Clowney Worth Chase for Raiders? 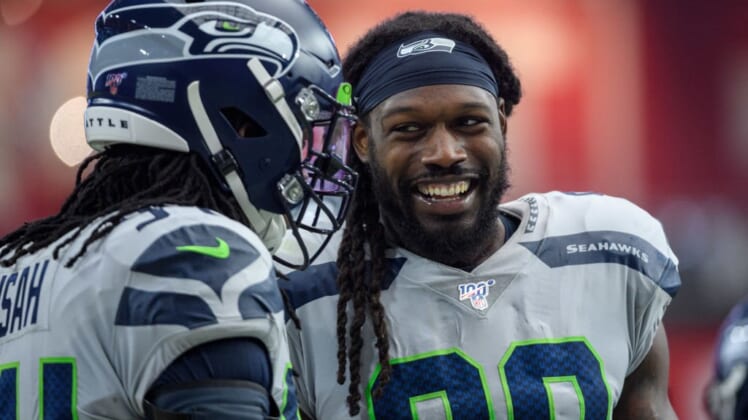 GLENDALE, ARIZONA - SEPTEMBER 29: Outside linebacker Jadeveon Clowney #90 of the Seattle Seahawks smiles alongside defensive end Ezekiel Ansah #94 during the the NFL game against the Arizona Cardinals at State Farm Stadium on September 29, 2019 in Glendale, Arizona. The Seahawks won 27 to 10. (Photo by Jennifer Stewart/Getty Images)

Ever since reports indicated the Las Vegas Raiders were in some level of pursuit of free agent defensive end Jadeveon Clowney, the debate in Raider Nation has been to ask the question: is he worth the time and money?

In a division with Kansas City Chiefs quarterback Patrick Mahomes, the Las Vegas Raiders cannot sell themselves short on the pass rush. Now that we’re over the Khalil Mack trade (some of us), the Silver and Black have to move forward in full force on the edge to compete with their rival and reigning champions. Could that missing ingredient be free agent defensive end Jadeveon Clowney?

A wise football mind (SEE: Al Davis) once said, “…somewhere, within the first 5-10 plays of the game, the other team’s quarterback must go down, and he must go down hard.”

Those words came directly from the late Davis—the most prominent voice in Raiders history. If head coach Jon Gruden has his way, he’ll channel his inner Al Davis in attempt to bolster the pass rush and sign one of the big names still on the free agent market – Jadeveon Clowney, per Cecil Lammey of 104.3 The Fan:

According to ESPN’s John Clayton, Jadeveon Clowney’s asking price started at $22 million annually at the beginning of the offseason. He overestimated his market value and had to drop his price. The Cleveland Browns made a lucrative offer, but they decided to restructure defensive end Olivier Vernon’s deal, keeping him on the books for a guaranteed $11 million.

Clayton broke down Clowney’s options, and what the defensive end could command this summer.

Nonetheless, Clowney had dominant stretches throughout his career. He’s a complete defender who can rush the passer and seal the edge against the run. Between the 2016 and 2018 seasons, he logged the third-most tackles for loss (53) behind Aaron Donald (57) and Chandler Jones (56), respectively.

“What’s interesting is what the Browns did,” Clayton wrote. “At the start of free agency, they made an offer to Clowney. It was believed to be in the $17 million a year range. Clowney, who wanted more than $22 million, said no. When he lowered his demands to $17 million, the Browns weren’t there. There are reports in the last month that they were offering $12 million to Clowney.

For Vernon to sign for $11 million, that tells me Jadeveon Clowney’s market value is now down to $10 million or less on a one-year deal. The Las Vegas Raiders are interested but their offer was considered to be the lowest of the small list of teams trying to sign him. The Tennessee Titans remain interested but I doubt they would offer him more than the one-year, $9.5 million contract they signed Vic Beasley to earlier this offseason.

Let’s assume the Browns won’t sign Clowney with Vernon and Myles Garrett as their projected starters. If the chase for the three-time Pro Bowler comes down to the Raiders, Titans and Seattle Seahawks, should the Raiders up the ante for him. What’s a reasonable offer?

What Does Jadeveon Clowney Bring to the Defense?

Don’t expect a huge sack number from Clowney. He hasn’t logged 10 sacks in any of his six seasons. Keep in mind, Maxx Crosby hit that mark as a rookie who played fewer than 58 percent of defensive snaps in his first four games as a fourth-rounder out of Eastern Michigan.

That’s not a diss to Clowney—the No. 1 overall pick from the 2014 draft—but the comparison puts Crosby’s impressive year into perspective.

Nonetheless, Clowney had dominant stretches throughout his career. He’s a complete defender who can rush the passer and seal the edge against the run. Between the 2016 and 2018 seasons, he logged the third-most tackles for loss (53) behind Aaron Donald (57) and Chandler Jones (56), respectively.

Without a doubt, Clowney would make it difficult for any team to run the ball against the Raiders. As for the pocket pressure, he needs to provide more impact to command a steep contract. His numbers fell behind Crosby and compared closer to Clelin Ferrell with the exception of quarterback pressures:

In fairness, Clowney played through a sports hernia, which required surgery in February. Although that’s considered a minor procedure, the Raiders will likely want to take a closer look at him when their facilities open for training camp:

Still, you understand why Mayock may hesitate to increase an offer for a player coming off a season with just three sacks. Clowney’s initial asking price seemed delusional compared to what he accomplished on the field in 2019.

Where Does Clowney Fit on Defense?

Most Raiders fans wondered where would Clowney line up, and who would have to take a lesser role if he joins the front seven.

Most teams use the nickel package more than their base defense, which means one more defensive back (a cornerback or safety) in place of a defensive lineman. The Raiders signed Cory Littleton and Nick Kwiatkoski, who will take on off-ball linebacker roles. Expect them to patrol the middle of the field in a 4-2-5 alignment.

Based on those numbers, Jadeveon Clowney would push Ferrell off the field or inside when he’s on the right side. After a 10-sack season, Crosby should be on the field as much as possible. Fans may sound off the alarm bells because you don’t want to see your No. 4 overall pick take on a reduced role in his second season.

However, in a 4-3 base scheme, Ferrell can line up at defensive end and Clowney could rush from the strong-side linebacker spot like Mack did as a rookie before his full transition to defensive end. That’s not ideal, but the idea is to put the best 11 defenders on the field whenever possible.

Under Guenther, Clowney could play the hybrid linebacker-edge-rusher role similar to Carl Lawson during the 2017 season when the Cincinnati Bengals had to divvy snaps on the end among three primary players: Michael Johnson, Carlos Dunlap and Lawson.

How Much Should the Raiders Offer Jadeveon Clowney?

Here’s the tricky and most important part of the chase. In a salary-cap league, teams can’t just acquire players by any means—front offices must weigh give and take. Clubs don’t make deals with monopoly money. Player value has importance, especially with the possibility teams may see a regression in the overall cap space due to the loss of revenue from COVID-19, according to ESPN’s Adam Schefter (h/t Reuters).

“The various estimates I’ve gotten from executives to owners is that the cap could be down anywhere $30 million to $80 million in 2021,” Schefter said

The Raiders must spend responsibly if they offer Clowney a multiyear deal because a player of his stature isn’t going to settle for a non-guaranteed contract. Obviously, on a one-year pact, the club has nothing to worry about beyond 2020.

Since Clowney hasn’t received the offer he initially wanted, the Raiders should rent him out for a year. Why? Because if he puts together a strong 2020 campaign, the 27-year-old, still in his prime, may holdout for a bigger deal.

With Crosby and Ferrell on the books for the long term, the Raiders have two young players to develop over time. Clowney could bring an immediate jolt to a pass rush that ranked 24th in sacks and 29th in quarterback pressures in 2019. He’s not a dominant edge-rusher, but some help is better than none for a group that needs a push.

Because of the uncertainty of the league’s cap situation in 2021, the Raiders should avoid a two-year commitment unless they’re able to void that second term and recoup their cash without much dead money leftover.

Right now, the Raiders have $8.3 million in available cap space, per Over the Cap. They can easily move around some money or cut a couple of reserves like linebacker Nicholas Morrow ($3.26 million), quarterback Nathan Peterman ($2.13 million) or tight end Derek Carrier ($1.85 million) for extra cushion. Remember, the team still has to sign its rookie class as well.

Jerry McDonald of the Bay Area News Group suggested an incentive-laden deal, which sounds good for the Raiders, but Clowney has no reason to accept that type of contract with a low base offer unless he’s desperate.

If the Raiders can ink Clowney for around $10-11 million, Mayock and Gruden should go for it and then add some escalators for sacks and games played.

If the Raiders want more pocket pressure, their list doesn’t have to begin and end with Jadeveon Clowney. Everson Griffen went to his fourth Pro Bowl with eight sacks, 11 tackles for loss and 35 quarterback pressures last year.

In 2018, Everson Griffen took care of his mental health and returned to solid form in his age-32 campaign. He’s not going to come cheap, but if Gruden seriously wants an experienced pass-rusher, the former Minnesota Vikings defensive end seems like a comparable option to Clowney. Also, he’s an older player who may be open to a more cost-effective deal.

Because of Jadeveon Clowney’s lukewarm 2019 campaign and inflated market value, one can argue for Griffen as a solid alternative option in terms of what he brings to the pass rush and his fit with Crosby and Ferrell.