Is 2021 Russell Wilson’s final season with the Seattle Seahawks?

The Seattle Seahawks have been a popular Super Bowl pick ever since Russell Wilson arrived in the NFL as a third-round pick back in 2012. Yet during the past few seasons, rumors have continued to build regarding the long-term future of Wilson in Seattle. We saw a similar situation play out with Matthew Stafford for several seasons when he was a member of the Detroit Lions, before officially requesting a trade out of town and landing in LA with the Rams.

Could we see a similar situation play out in Seattle with Wilson wanting to leave the Seahawks?

Would Russell Wilson ever leave the Seattle Seahawks?

As they go through the first lost season in Wilson’s NFL career, frustrations continue to mount.

Friday the QB spoke of wanting to forget about the past, one that’s included eight playoff appearances in nine seasons under coach Pete Carroll. Wilson would much prefer to look forward to his next opponent, but at the end of the season, when he’s officially ruled out of playoff contention might Wilson look forward to playing for a different organization?

It’s certainly possible. Even Peyton Manning and Brett Favre switched teams after a decade-plus of dominance.

Wilson has made his grievances well-known to the public, and those are just what we’re made aware of. It’s not hard to envision a scenario where the uber-competitive Wilson seeks a different opportunity in a bigger market elsewhere. With a no-trade clause in his contract, Russ can control his own destiny.

Russ might take his cooking skills to a larger market

This past offseason, it was rumored that Wilson had four teams on his list of ideal destinations. At the time, they were the Chicago Bears, Las Vegas Raiders, Dallas Cowboys, and New Orleans Saints.

It’s hard to envision any scenario where the Cowboys would prefer Wilson over Prescott at this point in their respective careers.

However, those other three teams could still be in play, in addition to a few others such as the Pittsburgh Steelers, New York Giants, or even the Green Bay Packers if they were forced to move on from Aaron Rodgers. For Wilson, returning to the same state as the Wisconsin Badgers, where he went to college could be a nice way to wrap up his playing career. 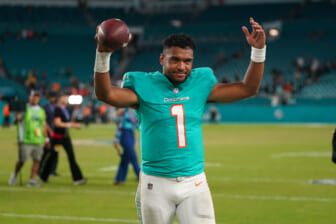