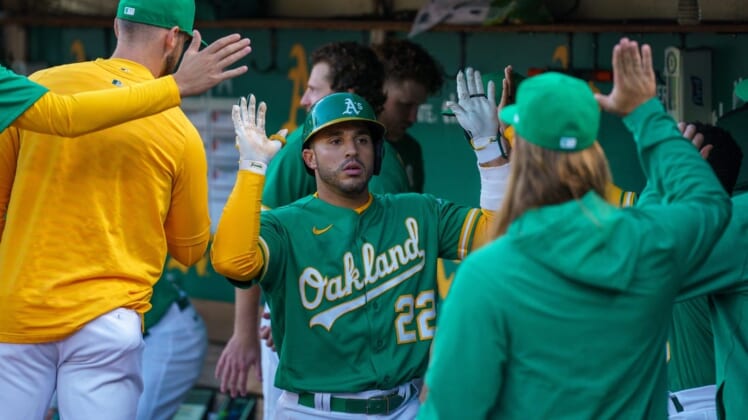 Vimael Machin and Stephen Vogt chipped in with RBI hits and A.J. Puk escaped a bases-loaded jam in the ninth for his first career save, helping the A’s win a second straight game for just the eighth time this season.

An Adolis Garcia run-scoring single offset Machin’s early RBI to send the game into the fifth inning tied at 1-1 before the A’s brought out the big sticks against Rangers starter Spencer Howard (1-2).

Laureano broke the tie with a two-out solo homer, his 10th of the season, before a Sean Murphy single set the stage for Brown’s two-run blast that capped a three-run uprising and gave Oakland a 4-1 lead.

Brown’s homer was his second in two days and was his 12th of the year. He had a homer in the first game of Oakland’s double-header split with the Detroit Tigers on Thursday.

Irvin (5-7) carried the 4-1 advantage into the eighth before walking leadoff man Leody Tavares and getting pulled in favor of Zach Jackson.

The Rangers got within 4-2 on a two-out RBI single by Marcus Semien, but lefty Sam Moll came on at that point, with the potential tying runs on base, and got Corey Seager to fly out to center field.

Irvin was charged with two runs, one earned, in his seven-plus innings. He walked one and struck out eight.

Oakland tacked on in the bottom of the eighth on a run-scoring single by Vogt, and needed the three-run cushion when the Rangers scored twice with two outs in the ninth on Nathaniel Lowe’s 13th homer, a solo shot, and Josh Smith’s RBI single.

Puk came on with the potential tying and go-ahead runs aboard and hit Kole Calhoun to load the bases before inducing Semien, a former teammate, to ground out to third base to end the game.

Brown and Chad Pinder had two hits apiece for the A’s, who out-hit the Rangers 9-7.

Semien and Lowe had two hits each and Tavares scored twice for the Rangers, who had opened the second half with an 8-0 win at Miami – 3,000 miles away – on Thursday.