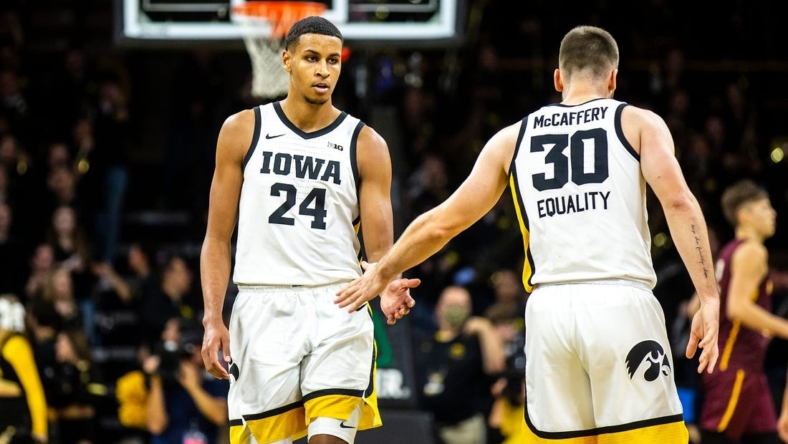 Kris Murray poured in 22 points and Patrick McCaffery had 21 points as Iowa put on an impressive display of offense in drubbing visiting North Carolina A&T 112-71 on Friday night in Iowa City, Iowa.

Payton Sandfort added 17 points and Filip Rebraca had 12 points for the Hawkeyes, who notched 25 assists on 41 baskets.

Iowa (2-0), who’ve opened the season with a pair of blowouts at home, scored more than 50 points in each half, finishing with 51.9-percent shooting from the field. Twelve players scored at least three points.

Kam Woods, in his first season with N.C. A&T after transferring from Troy, led N.C. A&T with 18 points. Demetric Horton and Marcus Watson each had 16 points for the Aggies, who shot 40.9 percent from the field in their first road game. They were charted with only seven assists.

The Hawkeyes made 11 of their 23 attempts from 3-point range.

Murray shot 7-for-11 from the field and McCaffery was 8-for-15. Murray and Sandfort tied team-high honors with three 3-pointers apiece.

All this offense came for the Hawkeyes despite a rather nondescript outing from Tony Perkins, a starting guard who had six points and a game-high six assists.

The Hawkeyes were up 52-32 at halftime. They stretched the advantage to 66-34 less than 3 1/2 minutes into the second half, capped by five points from Sandfort.

The Hawkeyes built a double-digit lead in just more than five minutes into the game. The Aggies were within 28-25 with six minutes remaining in the first half. Murray racked up seven points in the last 5 1/2 minutes before the break.