Iowa embark on life without Keegan Murray vs. Bethune-Cookman 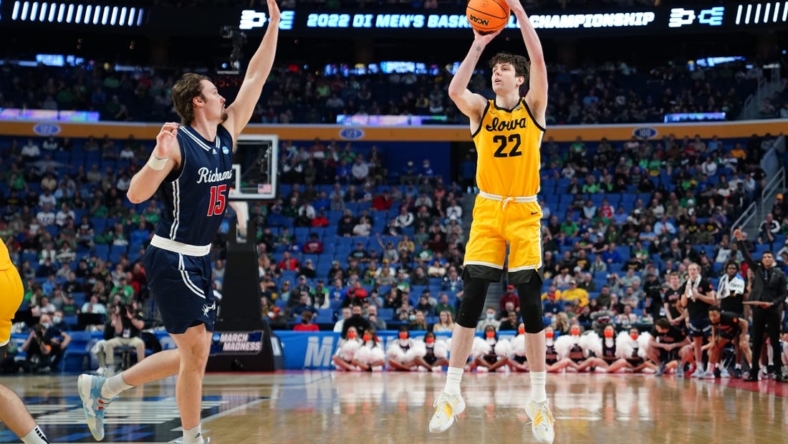 Iowa won 15 of 18 home games last season and finished 26-10, but if the Hawkeyes are to enjoy similar success in 2022-23, new offensive contributors will need to step up.

Iowa is eager to see how its returning core and newcomers blend as the team hosts Bethune-Cookman in the season opener on Monday in Iowa City.

Even after standout Keegan Murray was selected fourth overall by the Sacramento Kings in the 2022 NBA Draft, the Hawkeyes still return 52.4 percent of their scoring from last season.

The Hawkeyes led the Big Ten in scoring offense last season at 83.2 points per game, accomplishing the feat for the fourth season running. Patrick McCaffery (10.5 points per game) and Kris Murray (9.7), Keegan’s twin, are the top returning scorers.

“He’s a very even-tempered guy, but he’s also really smart,” Fran McCaffery said. “So he knows what he’s capable of, and he knows what our team needs from him. He’s accepting that responsibility. He’s been way more aggressive offensively.”

Bethune-Cookman is coming off a 9-21 season, including a 7-11 mark in its first campaign in the Southwestern Athletic Conference.

Led by coach Reggie Theus, a two-time NBA All-Star, the Wildcats endured numerous close defeats in 2021-22, finishing with a scoring margin of minus-6.1 points per game.

“Our expectation is to compete at the top of the conference,” Theus said. “Last year I thought we competed with everybody, got blasted maybe once or twice. I don’t expect anything different. We have more depth, more shooting, veterans coming back. We’re an all-around better basketball team.”

Bethune-Cookman returns each of its three double-figure scorers from last season, led by Joe French, a guard who averaged 15.8 points a game while shooting 44.1 percent from the 3-point arc. K.J. Davis (14 points per game) and Marcus Garrett (13.6) also are back, while the team also is touting a crop of newcomers headed by point guard Zion Harmon.

“Zion is truly a player that has all levels of basketball covered,” Theus said. “He’s a big-time scorer. He sees the floor. He puts pressure on the defense. His accolades speak for themselves.”