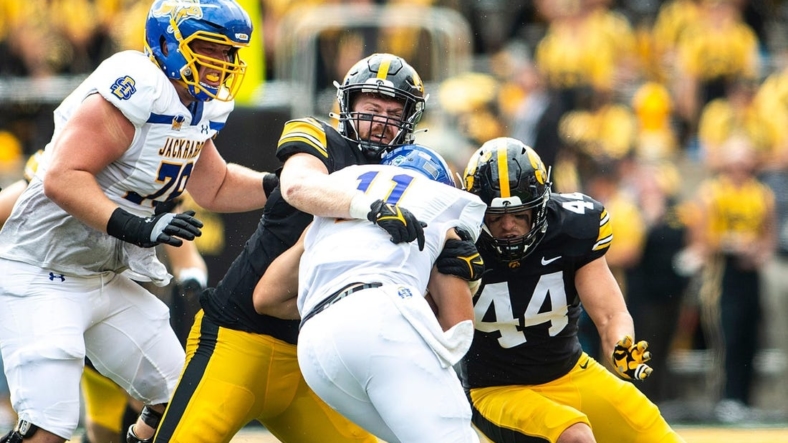 Linebacker Jack Campbell and defensive end Joe Evans recorded safeties that proved to be the difference as Iowa took down South Dakota State 7-3 on Saturday afternoon at Iowa City, Iowa, in the season opener for both teams.

Campbell, who was named preseason Big Ten Defensive Player of the Year, dragged running back Isaiah Davis into the end zone late in the third quarter to break a 3-3 tie. Evans then sealed the victory by sacking quarterback Mark Gronowski with 3:58 remaining in the fourth.

Iowa had a chance to extend its narrow lead following Campbell’s safety, but running back Leshon Williams fumbled at the South Dakota State 7 to give possession, and hope, back to the visitors.

But Gronowski and the Jackrabbits offense couldn’t capitalize on the opportunity and were held scoreless for the remainder of the game.

Gronowski threw for 87 yards on 10-for-26 passing. Davis added 50 yards on 18 carries and hauled in five receptions for 27 yards.

Hawkeyes quarterback Spencer Petras was 11 of 25 for 109 yards with an interception. Arland Bruce IV finished with five catches for 68 yards, and Williams carried the ball 24 times for 72 yards.

The teams combined for a total of 21 punts.

It looked like South Dakota State wasn’t going to score during the first 30 minutes of action, but linebacker Caleb Francl intercepted Petras to set up a 44-yard field goal from Hunter Dustman to tie things at 3-3 heading into the break.

Petras struggled in the opening half, completing 6 of 15 passes for a measly 41 yards.

After missing a 40-yard field goal attempt at the end of Iowa’s second drive of the game, Aaron Blom redeemed himself by making good on a 46-yarder to open the scoring with 1:11 left in the first quarter.