Iowa climbs atop Big Ten West with win over Wisconsin 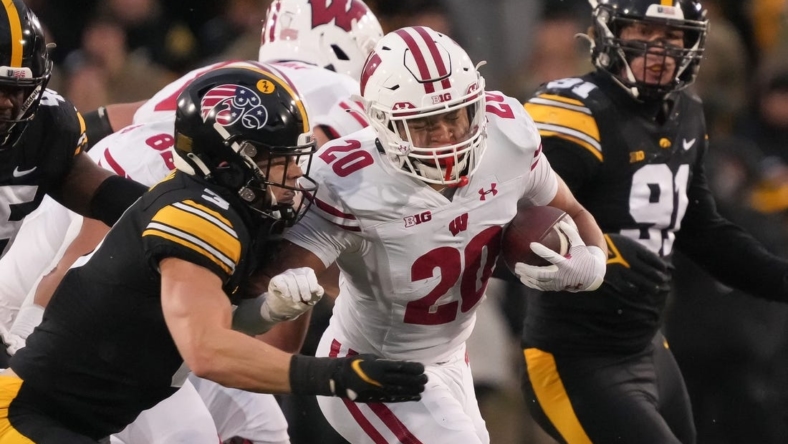 Cooper DeJean scored on an interception return and set up another touchdown with a punt return to pace Iowa to a 24-10 victory over visiting Wisconsin on Saturday, moving the defensive-minded Hawkeyes into a logjam atop the jumbled Big Ten West.

DeJean’s 32-yard pick six put the Hawkeyes up 14-3 in the second quarter. His 41-yard punt return to the Wisconsin 18 set up Spencer Petras’ 1-yard quarterback sneak that made it 21-10 early in the final period.

Iowa (6-4, 4-3 Big Ten) moved into a four-way tie for the West Division lead with Purdue, Illinois and Minnesota — following Purdue’s 31-24 victory over the No. 21 Illini. Minnesota kept pace with a 31-3 win over Northwestern.

Wisconsin (5-5, 3-4 Big Ten), fell to 3-2 under interim coach Jim Leonhard, promoted from defensive coordinator when Paul Chryst was fired following a 34-10 loss at home to Illinois on Oct 1.

Wisconsin had won 8 of the last 10 games against Iowa in the battle for the Heartland Trophy, including 27-7 last season in Madison.

Iowa’s defense entered third nationally in total defense at 264.4 yards per game and fifth in scoring defense at 14.3. The Hawkeyes held Wisconsin to 227 yards, including 51 rushing on 31 attempts.

Wisconsin quarterback Graham Mertz completed 16 of 35 passes for 176 yards with one touchdown and two interceptions. He also lost a fumble.

Iowa managed 146 yards total offense, including 52 on the ground. Petras finished 14 of 23 for 94 yards. Drew Stevens got the final points with a 44-yard field goal with 2:56 left.

Iowa’s special teams set up the other first-half score for a 14-10 lead at the break, despite the Hawkeyes being outgained 164 yards to 79.

DeJean extended the lead to 14-3, jumping a Mertz pass in the right flat and returning it 32 yards with 1:58 left in the half.

Mertz answered with a 51-yard touchdown to Keontez Lewis.

The Badgers capitalized on a turnover for a 3-0 lead, recovering a Petras fumble at the Wisconsin 49 to set up Nate Van Zelst’s 32-yard field goal.