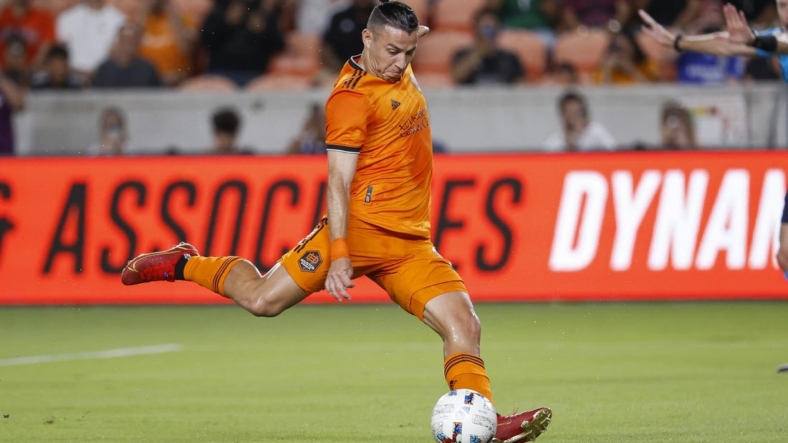 Kenny Bundy will make his debut as interim coach when the Houston Dynamo host Sporting Kansas City on Saturday night.

Paulo Nagamura was fired as coach earlier this week with the Dynamo (8-16-5, 29 points) sporting the worst record in the Western Conference and the second-fewest points in the league. Houston is on track to miss the playoffs for the fifth straight season and could end up setting a dubious franchise record for losses.

The Dynamo have lost more matches just twice — when they dropped 18 in 2019 and 17 in 2014. So with five games left, Bundy will have to sell his players on the idea that there is still something to play for.

“The first thing is it’s important for the players to understand the expectation is for us to be competitive in these five games,” Bundy told reporters. “There is going to be a structure, an outline that will benefit the players. Hopefully we can see games out.

“One thing this team has done is competed. My job is to build a structure, an outline and tweak a couple things.”

Sporting Kansas City (8-15-6, 30 points) also are in the midst of a poor season and are tied for 12th in the West with the San Jose Earthquakes, just one point ahead of the Dynamo.

But Sporting KC have been hot lately with a 3-1-1 mark over their past five games, including Sunday’s 2-2 road tie with the Los Angeles Galaxy. Though the club stands 12 points below the playoff line, there is optimism due to the solid stretch.

“Just continue doing what we’ve been doing for the past month or so,” SKC midfielder Felipe Hernandez said of maintaining momentum. “I think we’ve done well in all three phases of the game — defensively, offensively and set pieces. That’s the important thing. We have just got to keep working on those and minimize the mistakes and we’ll be in a good spot.”

Houston had a season-low four shots in Sunday’s 2-1 loss to the host Seattle Sounders and stands 1-6-1 over its last eight matches.

Sebastian Ferriera has scored a team-best 10 goals for the Dynamo. Johnny Russell leads SKC with eight.

Sporting KC recorded a 1-0 home win over Houston on March 5 and are 8-3-1 in the past dozen MLS meetings. Sporting KC also dispatched the visiting Dynamo 2-1 in U.S. Open Cup Round of 16 play on May 25.