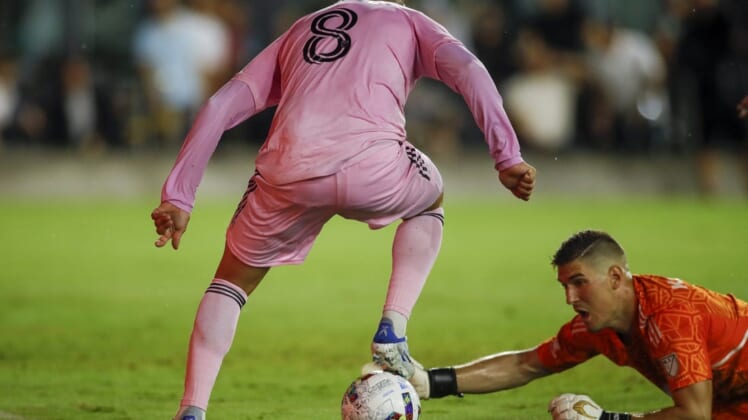 Rodriguez’s goal came in the 93rd minute and further spoiled what had been a stellar opening stretch to the game for Charlotte FC.

Robert Taylor and Gonzalo Higuain had the earlier goals for Inter Miami in the 59th and 72nd minutes. Gregore had assists on both tallies.

Yordy Reyna of Charlotte FC wasted no time in making an impact after a long weather-related delay, scoring in the opening minute for the first of his two goals.

Those were his first two goals of the season. Goalkeeper Kristijan Kahlina of Charlotte FC made three saves.

The start of the game was delayed for nearly 90 minutes because of weather.

Reyna posted a goal 27 seconds into the game on a shot from near the middle of the box. Karol Swiderski’s through ball set up the goal, and he was credited with an assist. The sequence happened so fast that Inter Miami goalkeeper Drake Callender didn’t have much time to react, as he was without defensive support.

Reyna’s second goal came in the 42nd minute, taking a shot from the left side and curling the ball into the upper-right corner of the net. He accepted a cross from Quinn McNeill to produce the goal.

Higuain, who was a substitute, notched his fourth goal of the season and his second in as many games to tie the score. He took Gregore’s pass in the box and had a clear shot past Kahlina.

Charlotte FC was issued five yellow cards in the second half, including four in a 12-minute span.

Callender made one save.

Kahlina’s best save came on Leonardo Campana’s attempt from short range in front of the net shortly after the midway mark of the first half.

Charlotte FC topped Inter Miami 1-0 on May 7 at home.