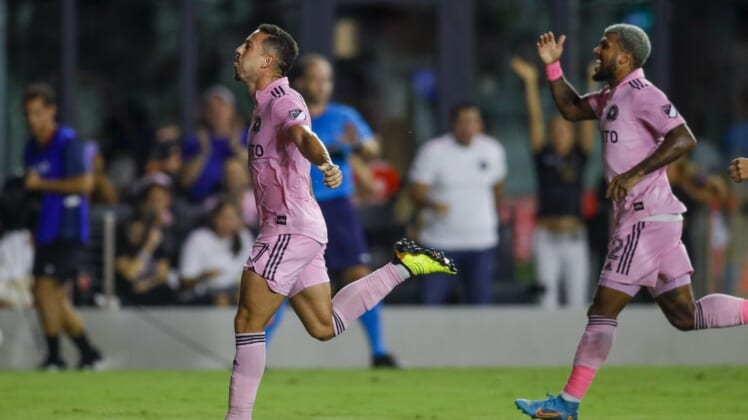 Ariel Lassiter’s goal in the waning minutes of the first half proved the difference as Inter Miami CF did just enough to beat visiting Toronto FC 2-1 on Saturday in an Eastern Conference match in Fort Lauderdale, Fla.

The win allowed Miami (10-10-6, 36 points) to leapfrog from eighth to fifth in the East standings with eight matches to play in the regular season. The Herons are unbeaten in in their past five matches and have just one loss in their past 12 home games.

Miami struck first as Jean Mota took a pass from Gonzalo Higuain and unleashed a wicked shot that handcuffed Toronto goalkeeper Alex Bono before bouncing away and into the net in the 24th minute.

Toronto responded just four minutes later with Lorenzo Insigne turning a rebounded shot from Federico Bernardeschi into a stunning volley that found the lower right corner from just outside the area. Bernardeschi’s shot bounced off Miami midfielder Gregore Silva before floating toward Insigne, who timed his scoring kick flawlessly.

Miami reassumed the lead in the 44th minute on Lassiter’s easy goal after a header into the goalmouth by Damion Lowe. The play began with a free kick by Mota to Alejandro Pozuelo outside the area before Pozuelo lifted a perfect pass to Lowe. Lassiter waited inside the far post, steadied the pass with his chest and pushed it past Bono for the goal.

Miami has now captured the past four matches with Toronto FC and has outscored the Reds 9-2 in those victories after losing the inaugural matchup between the teams.

Toronto (8-13-6, 30 points) was noticeably fatigued after a mid-week game at home against New England and never really threatened in the second half. The Reds are 2-2-2 in the East and fell to 12th place with nine matches remaining.