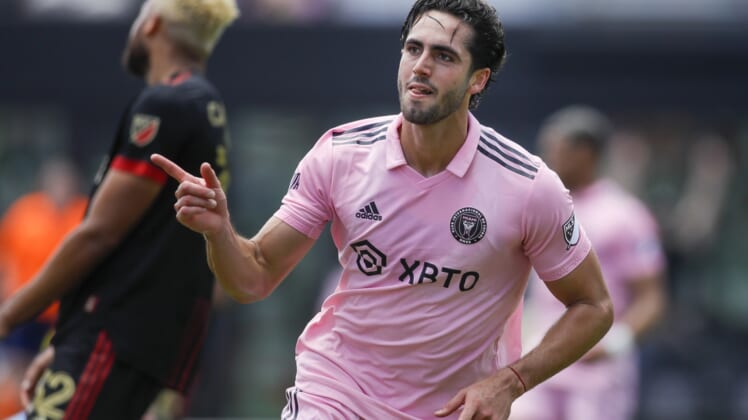 Leonardo Campana scored his fifth goal and added his second assist as Inter Miami rallied to a 2-1 victory over visiting Atlanta United on Sunday afternoon.

Bryce Duke’s first career MLS goal midway through the second half decided what Miami’s fourth consecutive win in all competitions for the first time in club history and third in a row in MLS play.

Goalkeeper Nick Marsman made six saves to preserve the victory, which also matches the longest MLS win streak for Miami (3-4-1, 10 points) three seasons into their existence.

The visitors led Miami 20-7 in overall shots and 7-2 in efforts on target, but are now winless with a pair of defeats in their last three games.

Campana has started in the center forward role in four consecutive games — including a midweek U.S. Open Cup victory — as Gonzalo Higuain has recovered from a knee injury.

And he’s making a case to win the starting job full-time from Higuain — the club’s all-time leading scorer — with his recent form.

It continued in the 28th minute when the Ecuadorian international took down DeAndre Yedlin’s cross with an exceptional first touch that evaded a defender, then drilled a low finish into the bottom right corner.

Atlanta had the better of the early second-half opportunities. And Marsman made his best stops in those moments, saving first Thiago Almada in the 50th minute and then Cisneros in the 53rd.

In between, Brooks Lennon wasted a promising rebound look of Almada’s miss.

When Miami took the lead in the 64th minute Campana again was the creative influence.

Ariel Lassiter spotted Campana with an excellent diagonal ball to split a pair of Atlanta defenders. But instead of taking a shot from a tight angle, Campana had the presence of mind to slot a cross over to Duke, who had a wide open goal awaiting for his simple finish.