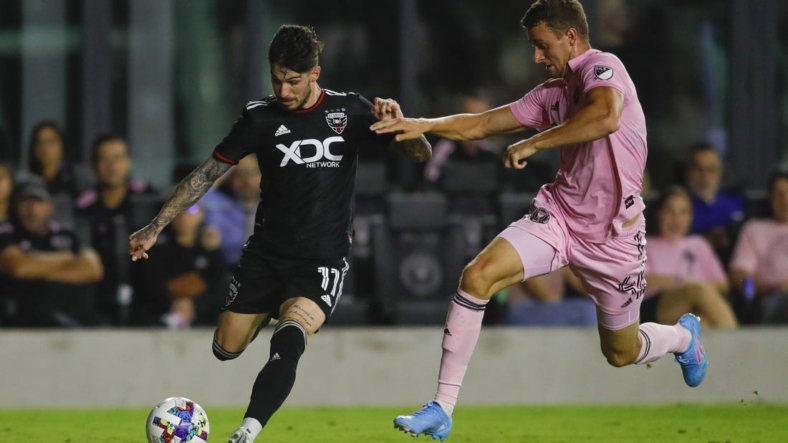 On the outside looking in with only four games remaining, Inter Miami know what’s at stake when they visit D.C. United on Sunday.

“Every game that we have left is like a final Cup game,” goalkeeper Drake Callender said. “We have to take that into account in our preparation. Again, taking it game by game but also just really leaving it all out on the field every single game. Going for it, going for the win. That’s what we have to do.”

Miami (11-13-6, 39 points) headed into the weekend in eighth place in the Eastern Conference table, one spot and two points below the playoff line, after halting a three-game slide with a 2-1 win against the Columbus Crew on Tuesday. That position could change before the Herons hit the pitch, with others in the thick of the playoff race in action on Saturday.

Gonzalo Higuain has been leading the way for the club since mid-July, scoring 10 of his team-leading 12 goals in the past 12 matches, including a brace to propel his side to victory against Columbus.

“Gonzalo’s playing his best ever football at Inter Miami and not just his football but his enjoyment of being an Inter Miami player,” coach Phil Neville said. “Being part of something really special with a group of players that do think he is a legend, do give him the utmost respect, do go to him for advice, look to him for leadership, and I think that’s played a massive part in his turnaround.”

D.C. (7-18-6, 27 points) heads into the contest looking for positives after being shut out for a third straight game, falling 3-0 to Sporting Kansas City on Tuesday after a pair of 0-0 draws in the two preceding matches.

“From start to finish, every player can do more and can do better,” coach Wayne Rooney told The Washington Post after the game. “It’s frustrating as a coach when that happens because I know there’s more in the players than they showed.”

United’s loss to Kansas City marked the 15th time in the campaign the club hasn’t scored a goal and was their sixth loss by at least three goals, most in MLS this season.

Leading scorer Taxi Fountas (concussion), who has missed the past three games, trained with the team this week and is expected to be available against Miami. He’s been held without a goal in his past six MLS matches.