Gonzalo Higuain’s first-half goal was the difference when Inter Miami CF continued to climb up the standings with a 1-0 victory over the fading Columbus Crew in Fort Lauderdale, Fla., on Saturday.

Higuain poached his ninth goal for Miami (8-9-5, 29 points) in the 16th minute. The Herons improved to six wins and three ties in the past 10 matches, moving ahead of the Crew (7-11-6, 27 points) and staying in range of a playoff spot in the Eastern Conference.

The Crew, which has lost eight of nine, were 10 points ahead of Miami on June 25.

Nick Marsman made three saves for his third straight shutout. The Crew have been blanked 10 times.

He made a strong stop of Luis Diaz in the second minute of stoppage time. Diaz went 1-on-1 with Brek Shea on the right side then drilled a shot toward the right corner that Marsman got in front of with his body.

The Crew’s other good chance came in the 68th minute when a long Lucas Zelarayan free-kick service bounced once in the middle of the box to Josh Williams at the left post. He couldn’t bring it down in time and sent a shot into the side netting.

Miami took the early lead in the first meeting between the second-year Herons and the reigning MLS Cup champion.

Higuain took advantage of an egregious back pass from Williams and easily scored. He made the interception at the top of the box and followed with a chip shot over Eloy Room. 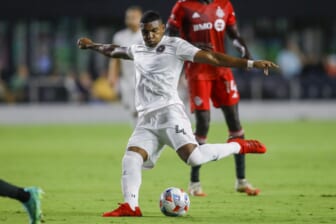 Columbus has allowed 19 goals in the first half, third-most in MLS.

The teams have quick turnarounds with matches on Tuesday. Miami is at Toronto FC; the Crew hosts the New York Red Bulls.