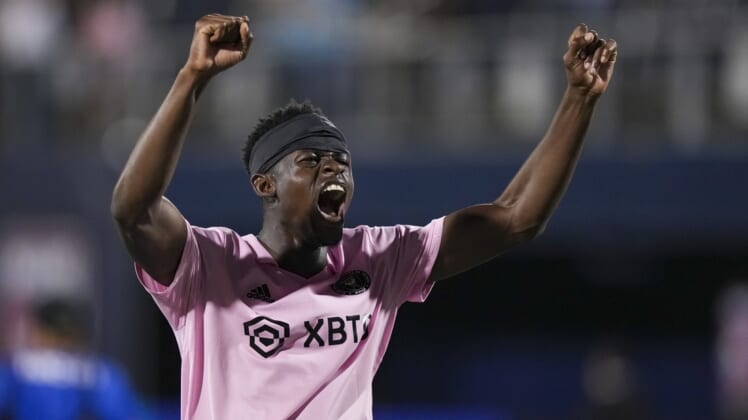 Inter Miami will try to win four games in a row for the first time in club history when they host Atlanta United on Sunday afternoon.

Inter Miami (2-4-1, 7 points) have won their last two league matches, 3-2 at home against New England and 1-0 at Seattle. They followed that up with a 1-0 midweek victory in the U.S. Open Cup over Miami FC of the USL Championship, the second tier of American club soccer.

“We want to be a hard team to beat and Sunday could be a first for us,” Miami manager Phil Neville said. “So there’s a lot of challenges and aims in front of us, but keeping clean sheets is the foundation for any success.”

Leonardo Campana scored the winner against Inter’s intracity rivals, had all three goals against New England and has played 90 minutes in three consecutive games.

And although last year’s leading scorer Gonzalo Higuain has recovered from a knee injury that kept him out of the last three matchday squads, Neville said Campana is likely to get the start again.

While there have been reports of friction between Neville and Higuain, Atlanta (3-2-2, 11 points) will still wish they had their opponents’ dilemma.

Club all-time leading scorer Josef Martinez is out for several more weeks after having his right knee scoped early this month.

And while Martinez had not recovered his peak form of 2017 to 2019 this season, he was still Atlanta’s only player with multiple MLS goals this year.

Neither Dom Dwyer nor Ronaldo Cisneros scored in starts in Martinez’s vacated role over the last two league games. But Dwyer had two goals and four others also scored in a 6-0 U.S. Open Cup win over FC Chattanooga of the third-tier USL League 1 on Wednesday night.

“We just haven’t been clinical enough in the final third, so last game against Chattanooga, we really wanted to try to break that dynamic to be able to finish,” said fullback Ronald Hernandez, one of Atlanta’s scorers. “So we were able to do that.”