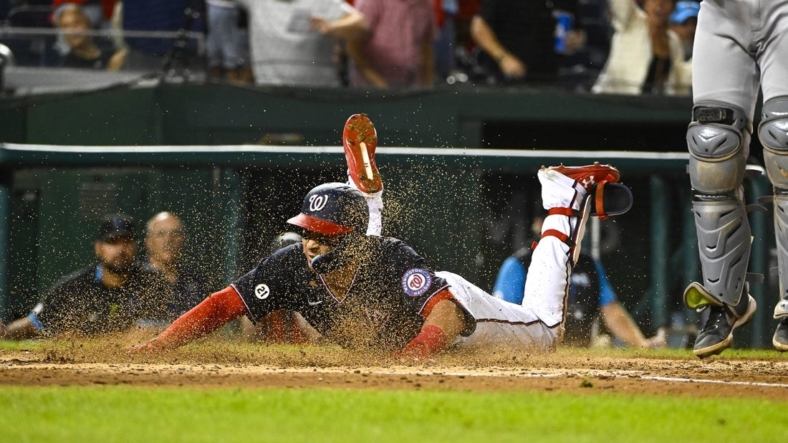 Washington trailed 4-0 until Meneses’ homer in the seventh sparked the team. Later in the seventh, CJ Abrams’ two-run triple tied the score, and Vargas put Washington on top with his ground-rule double in the eighth.

Perhaps the game’s most spectacular defensive play came in the top of the eighth, when Nationals right fielder Lane Thomas’ no-hop throw nailed Miguel Rojas trying to reach third base.

Washington (50-94) snapped a five-game losing streak as Carl Edwards Jr. (6-3) earned the win in relief, and Kyle Finnegan earned his ninth save of the year.

Miami starter Jesus Luzardo was leading 4-1 when he was removed. He struck out six batters in six-plus innings, allowing five hits, one walk and two runs.

Miami opened the scoring with four runs in the second inning. With no outs, Nick Fortes hit an infield single on a dribbler, and JJ Bleday pulled a ground-rule double to right. Bryan De La Cruz and Rojas added RBI groundouts, and after a Jordan Groshans walk, Lewin Diaz ambushed a first-pitch fastball for a two-run homer.

Washington got on the board in the seventh as Meneses drove a 1-1 curve off the padded wall in center. Bleday jumped to try to make the grab, but the ball hit the wall and then his leg, bouncing several yards into right field. Marlins right fielder Brian Anderson had run to center to back up Bleday, leaving no one to retrieve the ball in time to stop Meneses from rounding the bases.

Luzardo was removed from the game after walking the next batter, Luke Voit. Reliever Tanner Scott walked two more batters to load the bases before Victor Robles hit a sacrifice fly and Abrams tied the score with a triple that skipped off the glove of a diving Anderson.

Washington’s defense was stellar in the eighth as reliever Edwards picked off pinch-runner Luke Williams at first, and Thomas threw out Rojas at third.

Meneses’ one-out walk in the bottom of the eighth started the winning rally. He advanced on Voit’s single and scored on Vargas’ ground-rule double to left-center.