Inside the Numbers: Raiders Offensive Line 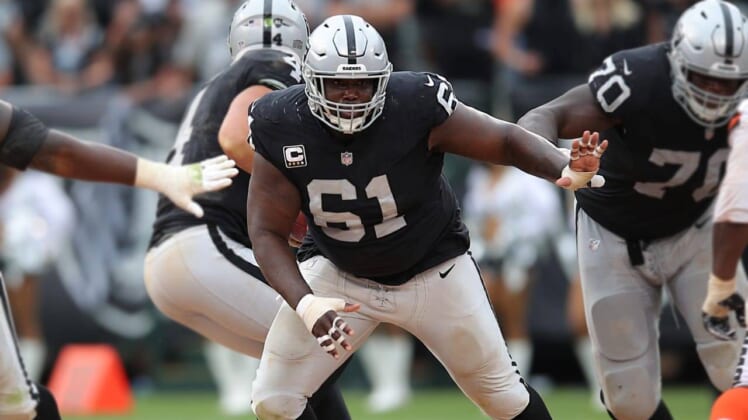 A collective groan was heard when the Oakland Raiders drafted two offensive linemen in the first three rounds of the 2018 NFL draft. Now, after a slow start, and injuries to older starters, Reggie McKenzie and Jon Gruden may be vindicated.

When you have a $125 million quarterback, it behooves you to make sure you have the right offensive line to protect him, provide him the time to pass, and is stout enough for your team to run the ball. After an 0-3 start, and injuries along the offensive front, the Raiders roll into Los Angeles this weekend starting two rookies at tackle. Kolton Miller has started on the left side all season with very good results and Brandon Parker, injured in camp and earlier in the season, will make his first start on the right side in place of the injured Donald Penn.

The Raiders offensive line has performed exceptional at times but has suffered due to the injury to Penn and a shaky start in a new system. Looking at the numbers, we can get a better sense of how the unit has performed just as its make up is about to change.

As we said at the start of this piece, when you have a $100+ million quarterback under center, you need to do your best to protect him. According to the latest statistics and grades from Pro Football Focus, the Raiders are lower middle half of the league when it comes to allowing pressure on Derek Carr.

Osemele ranks high in all passing categories on the Raiders offensive line.

We talked to PFF‘s NFL Editor Austin Gayle after the Browns win and he told gave us this assessment of the line’s play last week and some interesting insight.

The combination of Hudson and Osemele have anchored a line in transition. As the Raiders roll into the soccer stadium the Chargers call their temporary home, the challenge grows as talented, but green, right tackle Brandon Parker gets the start for Penn.

Kolton Miller has played well but has room to grow.

Pass blocking efficiency is an important stat in today’s pass-first NFL. It measures pressures allowed on a per-snap basis with a weighting toward sacks allowed. While the Raiders aren’t awful, there is room for improvement and it’s all at tackle, for the most part. With Miller learning on the job and doing well so far for a rookie, the insertion of Parker on the right side will be risky but a necessity for the thin Raiders.

If Miller continues to develop and progress, and Parker holds his own on the right side, the Raiders 2018 draft of these two players may be exactly what the team needs now.