Inside the Numbers: O-Line Resurgence & Not All Bad on Defense 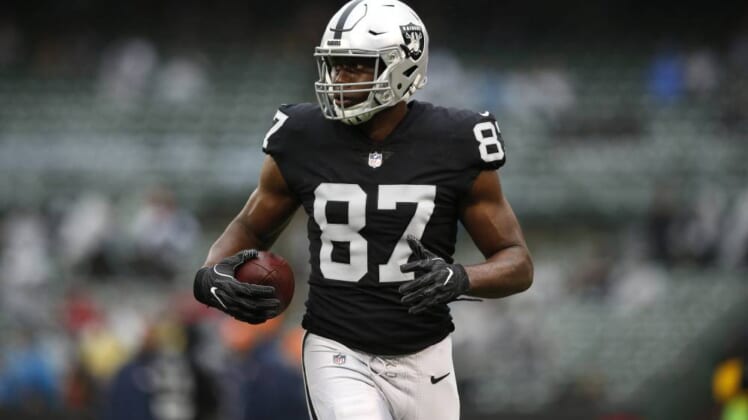 The Raiders defense may have – once again – faltered in the fourth quarter, but there are some encouraging signs. The Oakland offensive line also bounced back. Here’s a look at the numbers from the Colts game.

As I said after the debacle that was London, and the subsequent roster moves – Raider Nation needs to watch for improvement from key players who will be part of the rebuilding process. Sunday’s 42-28 loss to the Indianapolis Colts may have had fans running for the Malox, but a look inside some of the numbers shows there was an improvement in key areas.

This unit has been battered, bruised and abused all season long resulting in very little time for quarterback Derek Carr to throw. Sunday was different as the bye week helped the line get healthy and focused to better protect their franchise QB and do more to help the team compete. According to Pro Football Focus, rookie left tackle Kolton Miller notched a season-high 70.9 game grade vs. the Colts. Miller, who has been nursing a sprained MCL in his knee, gave up only one hurry, and no sacks or hits during Carr’s 29 pass attempts on the day. His teammates helped as the entire unit allowed just four total pressures against Indy helping it finish second in the NFL for Week 8.

Jared Cook continues to dominate the scene on the Oakland offense. Cook again was Carr’s top target and finished the game with a team-high 90.1 game grade from PFF. Cook is the poster boy for reliability having dropped just one pass in 40 catchable targets through the first half of the NFL season. He’s ranked fourth by PFF amongst all tight ends with a 78.5 overall grade and has 36 receptions for 474 so far this season.  He’s quite simply been most of the Raiders pass offense.

DBs Were a Mixed Bag

Raiders safety Karl Joseph gives up a touchdown vs. Colts.

Raiders safety Karl Joseph has reportedly been on the trading block for the past week or so and he got plenty of work on Sunday against the Colts. Joseph played a season-high 31 snaps and ended the day with a 54.0 game grade, ranking him 47th out of the 62 qualifying safeties in the NFL for the week. Overall, he played 15 coverage snaps and allowed four receptions – including one touchdown – for 42 yards. Joseph didn’t make a stop in the running game despite seeing 16 run snaps on the day.

Young cornerback Gareon Conley, also rumored to have fallen out of favor with Oakland’s coaching staff, also saw plenty of time. Conley played 35 coverage snaps and gave up three receptions for 33 yards and one touchdown. Conley did have one pass defensed and, at times, looked sharp. Conley did not play a snap in London and finished the Colts game with a PFF game grade of 79.1 which ranks 21st, and coverage grade of 71.1, which ranked 15th among 81 cornerbacks for Week 8.

All statistics provided by Pro Football Focus. Silver and Black Today is a media subscriber to PFF’s Premium Stat Package.