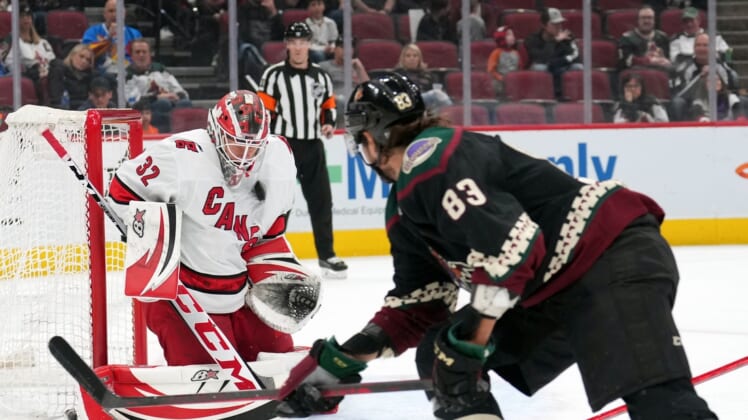 Max Domi notched his first goal with his new team as the injury-riddled Carolina Hurricanes beat the Arizona Coyotes 5-3 on Monday night in Glendale, Ariz.

Carolina goalie Antti Raanta made 23 saves against his former team just two nights after the team’s No. 1 goalie Frederik Andersen suffered an injury that has his future for the remainder of the regular season in doubt.

The Hurricanes (49-20-8, 106 points), who also were without captain Jordan Staal after he was injured at Colorado in that same game, moved back to a two-point lead over the New York Rangers in the Metropolitan Division.

Carolina split two goals on the road trip, falling to the team with the NHL’s best record in Colorado before beating the worst team in Arizona.

Nick Ritchie, Loui Eriksson and Alex Galchenyuk scored for the Coyotes (22-49-5, 49 points), who’ve lost seven straight games while allowing five or more goals in each of those results. Kyle Capobianco had two assists.

Carolina logged a season-high 52 shots on goal, with 24 of those coming in the second period. The Hurricanes didn’t go on a power play until the third period.

With goals from Trocheck, Fast and Domi, the Hurricanes built a 3-0 lead with less than five minutes gone in the second period. It was 5-3 by the end of the period.

Domi hadn’t scored since he arrived in a trade from the Columbus Blue Jackets, but this tally marked the 100th goal of his career. It was his 10th goal of the season.

All three Arizona goals came in a span of slightly more than 12 minutes, interrupted only by Niederreiter’s goal.