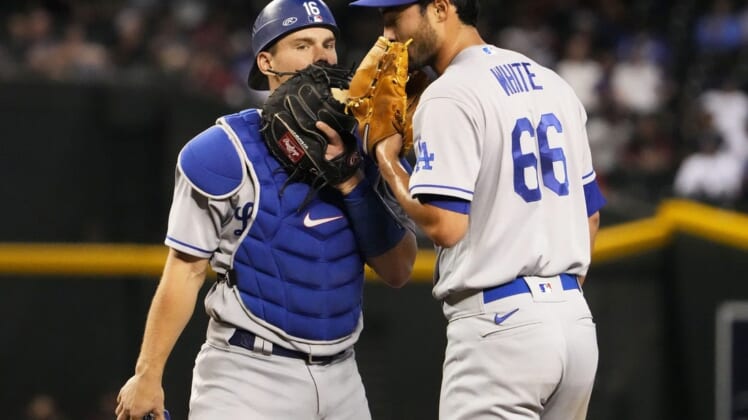 More pitching problems have caused the visiting Los Angeles Dodgers to alter their starting rotation for the second game of their series against the Atlanta Braves on Saturday.

The Dodgers won the first game of the three-game series 4-1 on Friday to extend their winning streak to four games. Los Angeles has won three of the four meetings with the Braves on the season.

“It’s going to be a big weekend,” Atlanta manager Brian Snitker said. “It’ll be like playoff baseball every night and these are two good teams going at it. They won (Friday) and we’ve got a pretty good guy on the mound for us (on Saturday).”

The Dodgers are already without Walker Buehler, who has a right forearm strain and had surgery to remove a bone spur in his elbow. While Clayton Kershaw is back from a stint on the IL, reliever Daniel Hudson left Friday’s game with what is likely a season-ending injury to his left ACL while fielding a grounder in the eighth inning.

White has appeared in nine games and made four starts this season. His most recent start came on June 7 when he pitched five scoreless innings and struck out five against the Chicago White Sox. White made two starts at Triple-A and did not allow a run and posted 10 strikeouts in 11 2/3 innings. He hasn’t pitched since Saturday.

The Dodgers had planned to start Heaney before the return of the shoulder issue that cost him 53 games earlier this season after two starts in April.

Heaney felt some soreness in his shoulder during his bullpen session on Thursday in Cincinnati. He was sent back home for an examination, which showed a strained rotator cuff.

“Not as severe,” manager Dave Roberts said. “I don’t foresee it being long.”

Fried has a seven-game winning streak. In his start against the San Francisco Giants on Monday, he gave up one run in seven innings on five hits, two walks and eight strikeouts.

Fried retired the first 15 batters when he faced the Dodgers on April 19. He threw seven scoreless innings, allowing two hits with eight strikeouts. He is 2-2 with a 3.30 ERA in six career starts against the Dodgers.

The opening game of the series marked Freddie Freeman’s first appearance at Truist Park since leaving Atlanta to sign a free-agent contract with the Dodgers. Freeman received his World Series championship ring in a pregame ceremony and was given a standing ovation by the sellout crowd when he went to the plate for the first time.

“It’s hard to put into words,” Freeman said. “I’m so glad I got a walk (the first plate appearance) because I couldn’t feel my legs for a few innings to be honest. It was emotional and I am worn out.”