Ingold: Playing for Gruden and Raiders is Everything You’d Expect it to Be 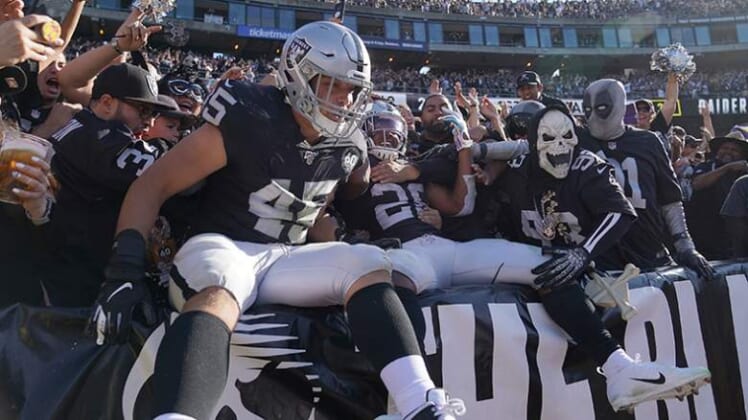 The Las Vegas Raiders fullback Alec Ingold talked about how his coach Jon Gruden’s persona compares to what he’s like as his coach on and he didn’t disappoint.

The entertainment business – which the NFL and the Raiders are part of – often has personalities larger than life. Men and women and personas that become so big, the person often plays the part whether it’s their true self or not. In the case of Jon Gruden, according to one of his young players Alec Ingold, what you see is what you get.

During his interview on our CBS Sports Radio 1140 show, Ingold was asked about playing for Gruden and the differences between what he’s like on the sidelines and the “Chucky” persona fans love so much.

“I think I chalk it up as…the fans love his passion and the grit he shows on the sideline. He brings that every single day,” Ingold said of Gruden. “And I think that’s what kind of shocked me was like he’s getting, you know, four, five or six hours of sleep every night, whenever he’s working out, he’s in the film room before anybody else and then like you show up and he’s ready to go.”

Every time you’re around him you say: alright we’re gonna learn something today – Alec Ingold on coach Jon Gruden

Ingold, an undrafted free agent out of Wisconsin, has become a poster boy for the “Gruden Grinder” type player the coach has been known to covet over the years. Ingold helped propel backfield partner Josh Jacobs to a fantastic rookie year complete with 1,150 yards rushing and seven touchdowns.

It was meeting Gruden at the Senior Bowl in early 2019 that convinced Ingold he wanted to play for Gruden and be a Raider.

“Every time you’re around him you say: alright we’re gonna learn something today,” Ingold said.

Like many young NFL players, Ingold knows he has to bring his best self to work every day to stay competitive and keep his roster spot on the Raiders. He sees examples in other veteran players but says his coach is exactly the same.

“But it’s every single day so I think just, you know, loving that process and just understanding it,” Ingold said. “I think that’s the biggest thing, and I wish everyone could see that; I wish (fans could see) the passion he brings every day because it’s contagious.”

The admiration is mutual as Gruden told the media last season he loved Ingold for his ability but also because of his love for the game.

“We’ve asked him to run the ball in short-yardage, fourth-and-1 in Indy, third-and-1 the other night, he’s gotten the first down. He’s playing on special teams. I love that guy,” the Raiders coach said then of Ingold. ‘I don’t want him to hear me say that, but I really deep down like that guy a lot. He’s what the position is all about.”

Listen to our latest Silver and Black Today show from CBS Sports Radio 1140: