IndyCar series to return to Iowa Speedway in 2022

Iowa Speedway will return to the NTT IndyCar Series calendar in 2022.

The track in Newton, Iowa, will host a doubleheader weekend July 23-24 after the series and the local Hy-Vee supermarket chain signed what IndyCar called a “multiyear” deal in a news release.

No further contract details were released.

“We’re extremely pleased to return Iowa Speedway to the NTT IndyCar Series calendar,” said Roger Penske, founder and chair of the Penske Corp. and owner of IndyCar. “Over the years, Iowa has proven to be a fitting showcase for North America’s premier open-wheel series. A key oval and a hallmark on our schedule, we deeply missed seeing our fans in Iowa this year and look forward to what’s ahead.” 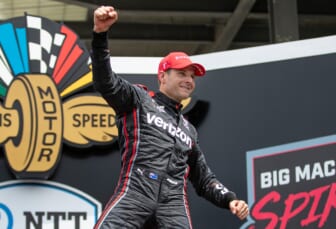 In all, 15 IndyCar races have been held at the Iowa Speedway, dubbed “The Fastest Short Track on the Planet,” since its opening in 2006. No race was held there this year.

“With our strong connection to local communities and involvement in the state, we plan to host an event that will receive national attention and make Newton an annual destination for racing fans,” Randy Edeker, chairman, CEO and president of Hy-Vee, said in a news release. “The weekend will be filled with multiple attractions and events that celebrate everything that is great about Iowa and NTT IndyCar Series racing.”

Josef Newgarden was the most recent IndyCar winner in Iowa, racing to victory on July 18, 2020, at the Iowa IndyCar 250s.

The remainder of the 2022 IndyCar series will be announced at a later date.