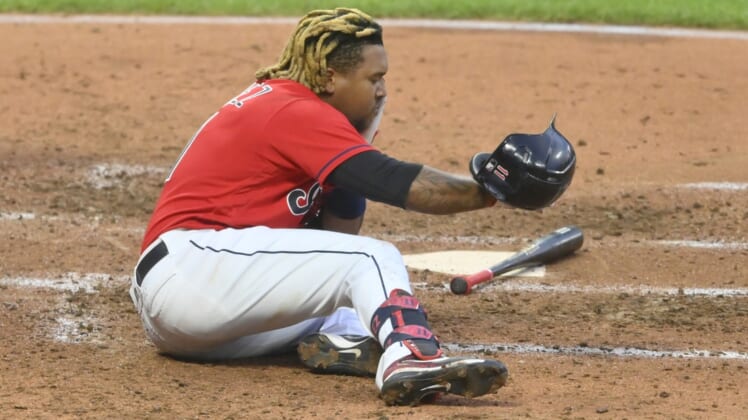 Jun 30, 2021; Cleveland, Ohio, USA; Cleveland Indians third baseman Jose Ramirez (11) reacts after he was hit in the face with a foul ball during the fifth inning against the Detroit Tigers at Progressive Field. Mandatory Credit: David Richard-USA TODAY Sports

Cleveland Indians third baseman Jose Ramirez sustained a facial contusion on Wednesday during the first game of a doubleheader against the visiting Detroit Tigers.

Ramirez was injured after he fouled a ball off his left cheek in the fifth inning. He remained on the ground for a few minutes before finishing his at-bat by grounding out to end the inning.

Ramirez, who belted his team-leading 18th homer in the first inning, stayed in the game through the sixth inning but did not take the field for the top of the seventh.

“He started to swell. We brought him in here and did (a scan), but just to be on the safe side, they’re gonna take him over to Lutheran (Hospital) just to get him looked at,” Indians manager Terry Francona said.

“I mean, I think everybody thinks he’s fine, just nothing to mess around with when you get up in your face and your head. So they’re gonna get him checked really good,” Francona said.

The Indians lost the first game of the doubleheader 9-4.