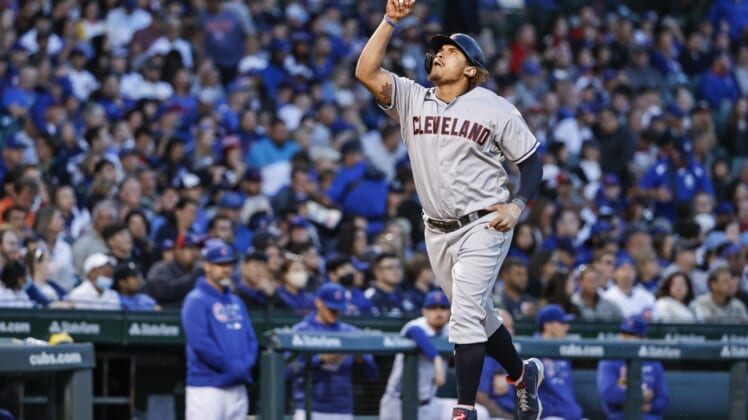 Bobby Bradley and Josh Naylor homered and five pitchers combined for a six-hit shutout to boost the visiting Cleveland Indians to a 4-0 victory against the Chicago Cubs on Monday night.

Cleveland also managed just six hits but benefited from the long ball to win for the sixth time in the past eight games.

Bradley connected for a solo shot with two outs in the second inning to open the scoring. The Indians extended the advantage to 3-0 in the fifth, as Naylor smacked a two-run shot.

The Cubs have lost six of eight, scoring three runs or fewer in each game during that span.

Indians starter Aaron Civale left the game one out shy of qualifying for his major-league best 11th win, as he departed with an injury to the middle finger on his pitching hand with two outs in the fifth and a 3-2 count on Eric Sogard.

The right-hander pitched 4 2/3 scoreless innings, limiting the Cubs to three hits — including two doubles from Willson Contreras — while walking two and striking out five.

Bryan Shaw (2-2) earned the victory with 1 1/3 innings of one-hit relief with two strikeouts.

Cubs shortstop Javier Baez was removed in favor of Sergio Alcantara following a mental lapse to end the bottom of the fourth. Standing on first base with one out, Baez forgot the number of outs on an Anthony Rizzo flyout to left field, continuing to third base before scrambling to get back to first before he was doubled off.

Cleveland scored its final run of the night in the eighth. Cesar Hernandez doubled with two outs and scored after Cubs reliever Tommy Nance uncorked two wild pitches with Amed Rosario at bat.

Naylor had two hits for Cleveland.

The Cubs stranded seven and went 0-for-8 with runners in scoring position.