Indianapolis Colts: ‘Too early’ to know if QB Carson Wentz will miss time 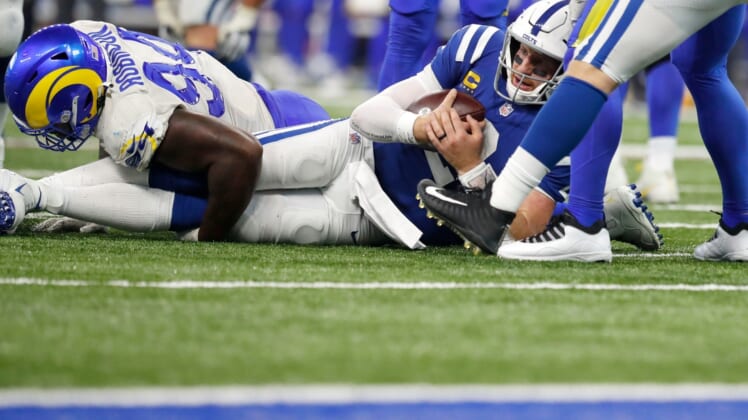 Indianapolis Colts quarterback Carson Wentz (2) is tackled close to the end zone during the second half of an Indianapolis Colts game against the Los Angeles Rams on Sunday, Sept. 19, 2021, at Lucas Oil Stadium. The Rams won 27-24.

Carson Wentz has a pair of ankle injuries and his status for Week 3 is cloudy as the Indianapolis Colts turn the page on a tough home loss to the Los Angeles Rams.

Head coach Frank Reich said Monday the team should know more about Wentz and his availability later in the week.

Wentz left the game in the fourth quarter and was unable to return. He bent awkwardly on a tackle by Rams defensive tackle Aaron Donald. When he reached the sideline, Wentz removed the shoe from his right foot and limped to the bench.

Backup Jacob Eason took over for Wentz. He was intercepted by Jalen Ramsey on his second pass attempt with 2:13 remaining, sparking the Rams to a rally and a 27-24 victory.

“He rolled it up pretty bad. I kind of had a sense when we walked off the field because I saw that it didn’t look good,” Reich said after the game. “The longer we were off the field there it just stiffened up. He tried, but there was no chance.”

It’s unclear if Wentz also hurt his left ankle on that play or earlier in the game.

Wentz finished 20-for-31 passing for 247 yards with a touchdown and an interception. Eason completed 2 of 5 pass attempts for 25 yards and the costly pick.

On the season, Wentz has completed 65.2 percent of his passes for 498 yards and three TDs against one interception.