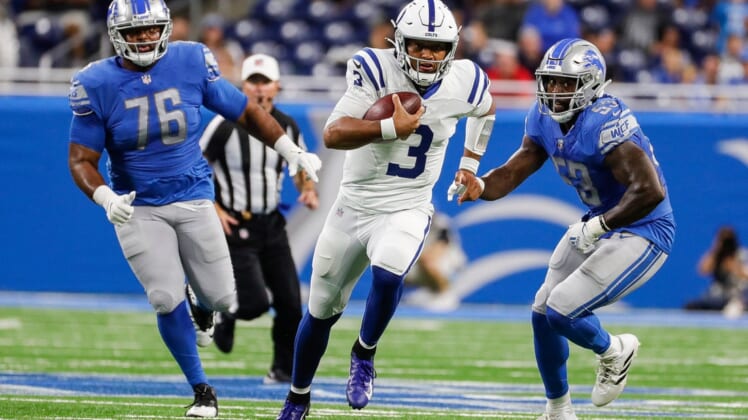 Indianapolis Colts quarterback Brett Hundley (3) runs against Detroit Lions defensive end Bruce Hector (76) and linebacker Charles Harris (53) during the second half of a preseason game at Ford Field in Detroit on Friday, Aug. 27, 2021.

According to multiple reports, Hundley worked ahead of Eason as Wentz missed practice with two sprained ankles. Wentz left the Week 2 loss to the Los Angeles Rams in the fourth quarter and has “significant swelling,” head coach Frank Reich said.

Hundley and Eason are both being prepped with the expectation Wentz will miss the Week 3 game at Tennessee, Reich said.

Wentz wouldn’t count himself out and said he’ll “throw the kitchen sink” at the rehab and treatment process with a goal of facing the Titans.

The Colts are 0-2 with three consecutive road games ahead.

Wentz said he has never played in a game after not practicing the week prior, and Reich indicated the Colts prefer using Friday’s practice as a benchmark for determining if players will be ready for gameday.