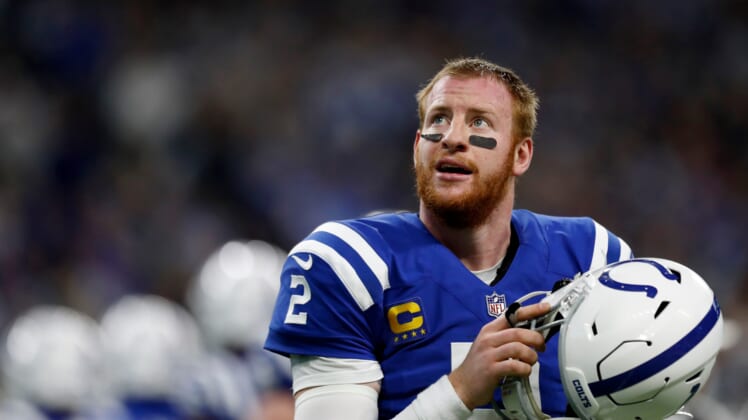 This offseason as the Indianapolis Colts were preparing to move away from Carson Wentz, they increasingly became desperate to do something, as team CEO Jim Irsay said “it was obvious” they couldn’t move forward with their existing starting quarterback.

Ultimately the Colts found middle ground by trading their third-round pick for Matt Ryan, but as Irsay tells it, the organization was considering another major trade, one that would have sent out two first-round picks for a “young franchise QB”.

This is interesting for many reasons. One, the Colts don’t have their own first-round selection in the 2022 NFL Draft after acquiring Wentz the season prior. Such a move would have likely meant trading their top picks in 2023 and 2024, which would have left the Colts without a first-round pick for three consecutive seasons. Not exactly ideal.

Related: Matt Ryan expected to be Indianapolis Colts starting QB for at least next two seasons

Which quarterback did the Indianapolis Colts have their eye on?

We’ll probably never know the answer to such a question. Of course, Irsay wasn’t willing to get in trouble for tampering, choosing not to name the player, but that doesn’t mean we can’t do some speculation for fun.

Still, we can take what he said and set up some speculative parameters. Irsay said they explored trading two firsts for a “young franchise QB”. To me, young may stop at about 26, maybe 25, for a QB in particular.

As you can see, there are very few quarterbacks who come to mind that fit this criteria of being a “young franchise QB”.

Deshaun Watson is the obvious name that several franchises are known to have chased after, maybe Irsay was speaking of him?

Another name that comes to mind is Kyler Murray. After the downright strange offseason between the Cardinals and their franchise quarterback, seemingly unable to agree on his dollar amount value to the organization, maybe the Colts poked around the 2019 No. 1 overall pick?

Then, there’s always Jalen Hurts, who may not appear to be available now, but there was a time when the Eagles were linked to Russell Wilson, meaning they were shopping at some point this offseason. Of course, if they were to trade for Wilson, they’d naturally want to know what Hurts could bring back in a trade. Again, two firsts seems a bit high. And Russ is 33, not exactly young for a QB.

The last name on the list is similar to the Hurts situation. No one expects the Dolphins to move on from Tua now, but when bigger fish were still swimming around, like Tom Brady and Watson, well the same scenario applies. The Dolphins would have wanted to know who would pay what for Tua. But two firsts? Get out of here.

Of course, it’s possible Irsay misspoke or perhaps misremembers just how old and young some of these quarterbacks are. Jared Goff is 27, it’s possible they considered trading for the former No. 1 overall pick, but likely not at the cost of two firsts.

As we touched on, there’s no telling who the Colts may have had their eye on, but from the speculative list, it’s possible they made the right move by only parting with a third round pick for a chance at Matt Ryan returning to Pro Bowl form.