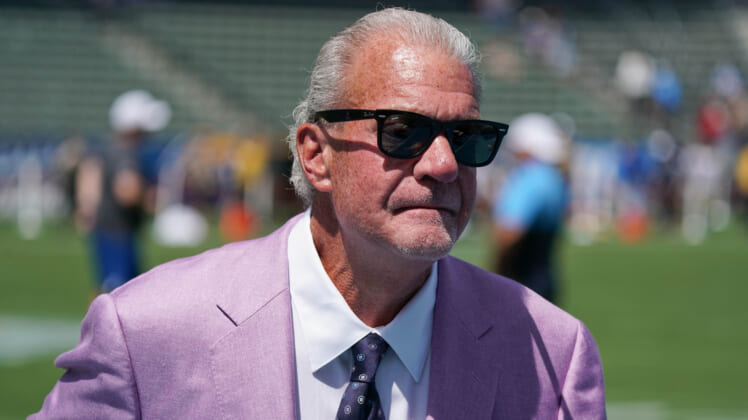 Indianapolis Colts owner Jim Irsay has built a reputation as a collector of unique pop culture artifacts, and his latest may be the most unusual but heavily relevant expensive item he has purchased yet.

On Wednesday, a special piece of memorabilia was up for auction. Boston-based RR Auction placed a baseball signed by Ukrainian President Volodymyr Zelenskyy up for bidding. Obviously, it’s odd to have a president signing sports memorabilia, especially from a nation that is not known to be much into the sport.

However, the ball was a gift to government affairs specialist Randy L. Kaplan from Ukraine’s United Nations Ambassador Volodymyr Yelchenko. The New York-based specialist reportedly has been asking world leaders and heads of state to sign baseballs since the 1990s. For this one-of-a-kind item, the Ukrainian President signed his last name in both English and Ukrainian.

The baseball was projected to sell for $15,000 and ended up receiving 35 different bids. To the surprise of the auction house, the ball ended up selling for three times more than the expected price with a winning bid of $50,103. However, the auction for the special item wasn’t just about wealthy collectors buying odd sports artifacts. RR Auction will also donate their portion of the proceeds — expected to be over $15,000 — to relief efforts in Zelensky’s war-torn nation.

Following the sale, Indianapolis Colts owner Jim Irsay took to his Twitter account to reveal that he was in fact the purchaser of the Zelensky baseball.

Also this week, the NFL owner purchased a guitar used by deceased Nirvana frontman Kurt Cobain. The instrument was used in the filming of the band’s iconic “Smells Like Team Spirit” music video.