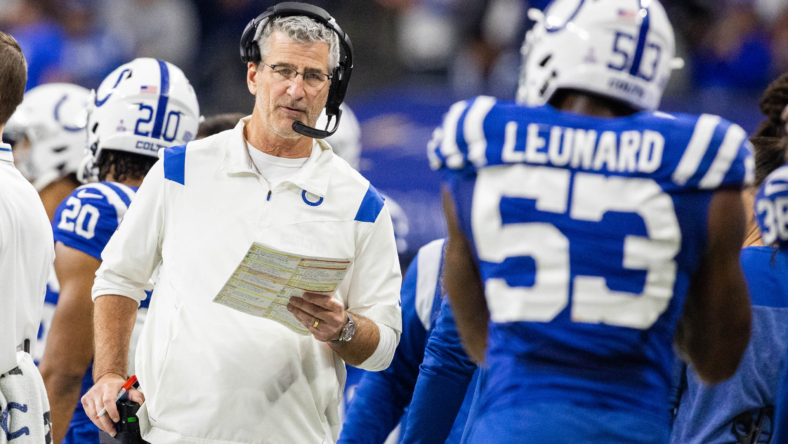 The Indianapolis Colts head east to face off against their archrival, the New England Patriots. It’s a matchup that is almost always circled on the schedule as a must-watch and must-win. This season seems to lack some of that appeal and luster. It might have something to do with the calamity that Colts football has become.

We won’t get into that topic today. Instead, we’ll look at this week’s matchup and what the Colts must do to leave with a victory. While some fans would like the team to continue to lose and improve their draft standing. The players and coaches are still working hard to win games, as their jobs depend on it.

Heading into halftime with a lead

The Colts have trailed at the half for 10 consecutive games. It’s a lot easier to win when you are ahead rather than continually climbing out of a deficit. It also allows the offense to stay balanced and makes Frank Reich’s play-calling easier.

The Colts recently fired their offensive coordinator, Marcus Brady. The organization put the team’s slow starts to the season and games on Brady. This week will show the fan base if those words are correct or if the team was just scapegoating someone. Last season the Colts ran the ball a lot against New England and were able to win.

You can imagine that the Colts want to repeat that game plan but also incorporate some more passes so the team won’t be so predictable. Of course, Bill Belichick and New England will have a sound defensive plan to take away the Colts’ running game.

Speaking of New England’s defensive plan, coach Belichick is the ultimate master at coming up with different approaches for their opponents. His defensive schemes and coverages feast on rookie and inexperienced quarterbacks. Sam Ehlinger is going to get his first crack at handling a legitimate NFL defense.

No disrespect to Washington, but their defensive coordinator isn’t on the same level as Belichick. The Colts this season have been averaging 16 points and two turnovers per game. They will need to buck those trends this week if they have any chance at winning. The short and quick rhythm passes that the team displayed last week should be back in action against the Patriots.

This style of offense should help limit the amount of defensive deciphering for Ehlinger. Subsequently, this should also limit the opportunities for an interception to be made. His legs will again be required for this offense to stay on schedule. New England’s defensive rankings:

Again, as previously stated, one of the big reasons for the termination of Marcus Brady was because of the team’s slow start in games. Again, the team has gone into halftime trailing in 10 consecutive games. So, hopefully, the problem has been fixed, and that horrific streak can finally come to an end.

However, in the sense of being pragmatic, if the streak doesn’t end, even more blame and pressure will be placed on Reich and general manager Chris Ballard. For now, though, let’s think positively.

Reich will call a better game that will better utilize the offensive playmakers the team has. The Colts will get on top and then stay on top all game long and keep New England in the basement of the AFC East.

Related: Indianapolis Colts trade for Zack Moss: A look at the impact