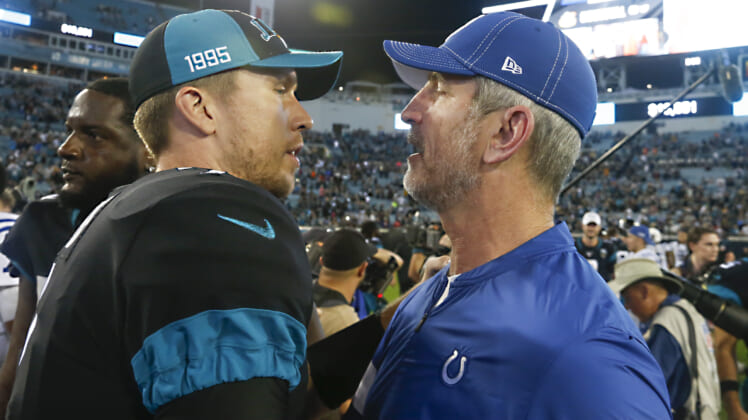 The Chicago Bears released quarterback Nick Foles on May 1, making him a free agent. Now that the former Super Bowl LII MVP has had some time to ponder his playing future, one team linked to the 33-year-old QB is the Indianapolis Colts, according to Zak Keefer of The Athletic.

Here’s why the signing would be a perfect match for both Foles and the Colts.

Frank Reich and Nick Foles were special in Philly

Entering his 11th year in the NFL, Nick Foles is ready to accept his role as a backup quarterback, for now. No one doubts his ability to make spot starts, but you won’t find a team willing to head into the season with Foles atop their depth chart. Not in 2022.

Yet, there was a time when he played as a QB1. Perhaps the last time we saw Foles play at his best came during Philadelphia’s Super Bowl run in 2017, when now-Colts head coach Frank Reich was Philly’s offensive coordinator. It culminated in the franchise’s first Lombardi Trophy, which is certainly on Indianapolis’ radar in the next few years.

The chemistry Foles and Reich had built up during their two seasons together helped create the magical Philly Special moment, who knows what else might be in store now that both have experienced their own successes and failures since?

If Foles is looking to sign with a team where he knows he’ll have a strong opportunity to succeed if he gets a chance to play, the Colts might be his best bet. He knows this, based on his past experience with coach Reich.

General manager Chris Ballard has carefully built the Colts into a playoff roster, which has now essentially become the Jonathan Taylor show.

They believe they have the roster to win the AFC South, and aside from the Tennessee Titans, they may face little competition, depending on how quickly new coaching staffs in Jacksonville and Houston can turn their organization’s around.

This is why they were so insistent on moving on from Carson Wentz after a failed playoff effort a season ago, coming one win shy of the postseason.

The Colts are likely to continue relying heavily on their star running back, and having Matt Ryan around will undoubtedly improve the passing game, but what if the 37-year-old has to miss extended action for the first time in his 14-year career?

If Matty Ice has to grab an ice pack, the Colts would then be relying on 2021 sixth-round pick Sam Ehlinger. Just 23, the former Texas Longhorn has yet to throw an NFL pass.

While the Colts like Ehlinger, and still have both James Morgan and undrafted rookie Jack Coan on the depth chart, relying on any of the trio for multiple starts isn’t likely to lead to a playoff spot.

Signing Nick Foles on the other hand? Now we’re talking.

Foles could connect on the long ball to Michael Pittman Jr. and Parris Campbell, with Alec Pierce chopping up space underneath, and still have the 2021 rushing leader to tire out the defense.

Even if Foles doesn’t have the capability to play at an elite level, his experience would likely take the Colts further in 2022 than trying their hand at pushing an inexperienced signal-caller out on the field before they’re ready for live bullets.