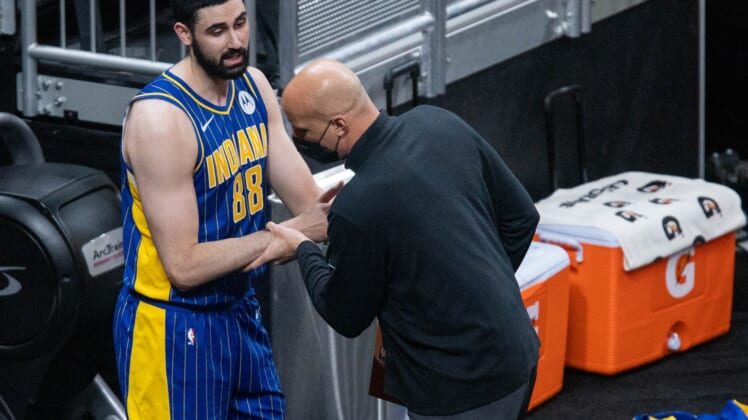 The Indiana Pacers suspended assistant coach Greg Foster for one game and fined center Goga Bitadze for their tense in-game argument during Wednesday’s 104-93 home loss to the Sacramento Kings.

The incident occurred during the third quarter of the team’s seventh setback in the past 11 games.

“This is an internal team matter and no further details will be released,” the Pacers said in their statement to announce the discipline.

By various accounts, Foster requested that Bitadze protect the lane better. Bitadze then made a 3-pointer and reportedly used profanity while telling Foster to sit down.

During the next stoppage, Foster rushed toward Bitadze and the two had to be separated by players and other coaches.

Foster is expected to serve his suspension Thursday night when the Pacers (30-35) host the Atlanta Hawks.

The incident comes in the same week that reports surfaced that Indiana first-year coach Nate Bjorkgren could lose his job after the season due to poor relationships with many players and others in the organization.

Foster played 13 NBA seasons (1990-2003) as a player before turning to coaching. He is in his first season with the Pacers.

Bitadze is averaging 5.1 points and 3.3 rebounds in 38 games (two starts) in his second NBA campaign.