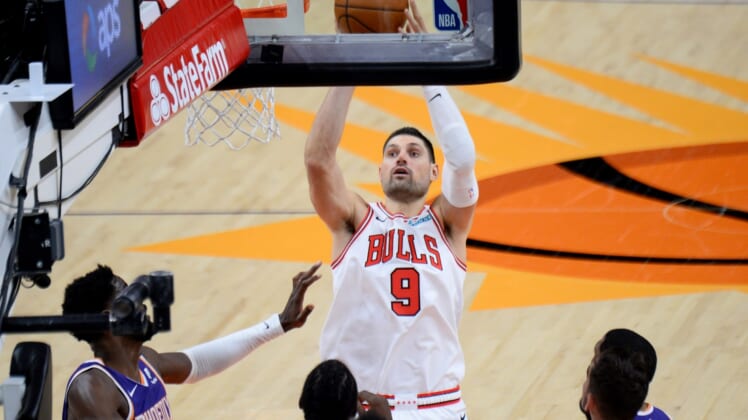 The Chicago Bulls hope to use a home win over Brooklyn as a springboard for much-needed road success when they begin a five-game road trip Tuesday night in Indiana against the Pacers.

Both teams currently reside in play-in playoff positions in the Eastern Conference as the 10th-place Bulls and ninth-place Pacers meet for the third and final time this season.

At stake is the season series and head-to-head tiebreaker after each recorded a win on the other’s court earlier this season.

The Bulls had the most recent success of the two, riding 30 points from Zach LaVine and the balanced complementary scoring of six others in double figures to a 120-112 overtime victory in February.

That meeting came after the Pacers dealt Victor Oladipo to Houston in a three-team deal that resulted in the acquisition of Caris LeVert from Brooklyn — but before LeVert joined the team on March 13 following surgery to treat kidney cancer.

LeVert came up big with 26 points and nine assists in a 139-133 overtime win at San Antonio on Saturday that snapped the Pacers’ three-game losing streak.

LeVert seems to be warming up to his new surroundings. Having been held to 13 or fewer points in three of his first five games for Indiana, he has averaged 18.7 points over the past three games.

Domantas Sabonis and Malcolm Brogdon both sat out the second night of a back-to-back Saturday, giving each two days off to deal with ankle and hip issues, respectively. They are considered game-time decisions for the Chicago visit.

LeVert said his team started playing better basketball when it worried less about who wasn’t there and more on just enjoying the competition.

Bulls newcomer Nikola Vucevic contributed 22 points and 13 rebounds to Sunday’s 115-107 win over the Nets, which ended Chicago’s six-game losing streak. The Bulls have lost four in a row on the road.

Bulls coach Billy Donovan noted after the win that it’s only natural that his team would struggle a bit in the short run after the acquisition of Vucevic from the Orlando Magic at the trade deadline.

“Stylistically, we’ve completely changed the way we played in a week’s period,” he said. “And that takes time.”

Vucevic’s double-double against the Nets was his second in five games since joining the Bulls, while the win was his first.

The Bulls will move on from Indiana to road stops in Tampa (to play Toronto), Atlanta, Minnesota and Memphis before returning home for a Vucevic reunion game against the Magic next Wednesday.

Meanwhile, the Pacers get Minnesota at home on Wednesday before going on the road for five of six.