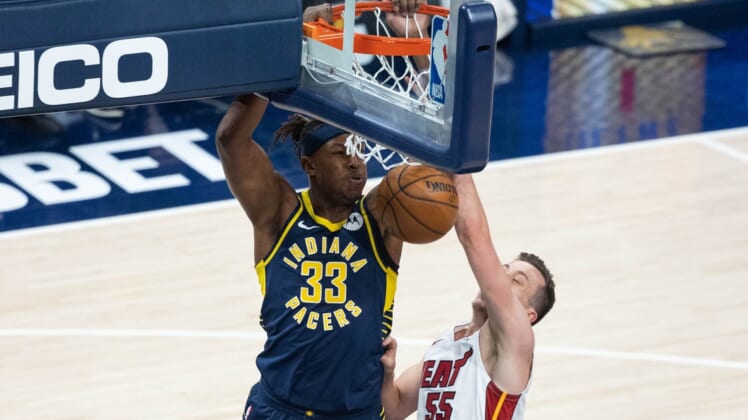 The Charlotte Hornets are coming off a dud. The Indiana Pacers are trying to put something good together before it’s too late.

One of the teams should end up with a good feeling when they meet Friday night in Indianapolis.

The Pacers are on the playoff bubble. Meanwhile, the Hornets, despite all their recent progress, didn’t resemble a playoff team Thursday night in a 111-89 road setback to the Brooklyn Nets, who played without James Harden.

“We’ve been here all year,” Hornets coach James Borrego said of what otherwise has been a season with increased consistency, leading Charlotte to a tie for fourth place in the Eastern Conference.

It was a rare national television opportunity Thursday night for Charlotte, which fell flat by scoring only 11 first-quarter points.

Now it’s a matter of setting aside a disappointing performance with a quick turnaround awaiting the Hornets. Their coach hopes the team’s regular quest to show what it can do will be present again.

Indiana lost 92-87 on Wednesday night to the visiting Miami Heat. The Pacers seem adamant about sorting out a variety of issues.

“I think our style of defense is just fine,” Pacers center/forward Myles Turner said. “I think it’s all effort and execution down the stretch. I don’t think the system is to blame.”

The Pacers went 6-8 in March, losing their last two games. The Thursday contest will be their second home game during a stretch of four home assignments in a five-game span.

The Hornets are 1-1 on their six-game road swing. They are 11-14 in road games this season.

“We feel very confident on the road and comfortable,” Borrego said. “Our guys like this bunker sort of mentality. We just have to continue being who we are.”

The status of Indiana’s Domantas Sabonis might be worth tracking, even though he returned to the Wednesday game after exiting with a left quad contusion.

Indiana signed forward Oshae Brissett, a second-year pro out of Syracuse, to a 10-day contract Thursday. He has played 19 career games in the NBA, all with the Toronto Raptors last season. Brissett has spent most of his time as a pro in the NBA G League.

The Hornets had guard Malik Monk in action Thursday after he was a game-time decision because of a foot injury. However, Monk exited the game due to a sprained right ankle, leaving his status in doubt for Friday.

Charlotte gave plenty of court time to reserves in the second half of the lopsided loss to Brooklyn, probably sensing the need to back off with the score out of reach and the busy schedule upcoming.

The Hornets are still adjusting to losing rookie sensation LaMelo Ball to broken wrist. Charlotte is 4-2 since Ball’s injury.

The Hornets and Pacers split two games in late January in Charlotte. Doug McDermott’s season-high 28 points were the key in the Indiana victory Jan. 27, more than double his season average of 13.4 points per outing.