Indiana Pacers aim to put past aside in crucial matchup vs. Washington Wizards

The Indiana Pacers went 0-3 against the Washington Wizards in the regular season and allowed more than 130 points each time.

The Pacers get the chance to sweep those struggles aside Thursday night when they visit Washington in the NBA’s play-in round. The winners earn the No. 8 seed in the Eastern Conference bracket and will face the top-seeded Philadelphia 76ers in the opening round of the playoffs. The losers begin their offseason.

Indiana star Domantas Sabonis isn’t expecting Thursday to be his last game of the campaign after the Pacers pummeled the visiting Charlotte Hornets 144-117 on Tuesday in their first play-in contest.

“This is the perfect time for us,” Sabonis said. “It is one game. Anything can happen. We’re going to come out and keep playing team ball and hopefully get this win.”

The Wizards were a hot team by winning 17 of 23 to close the regular season, but they were a cold-shooting squad in their 118-100 play-in loss to the host Boston Celtics on Tuesday.

Washington stars Bradley Beal (10 of 25 from the field) and Russell Westbrook (6 of 18) often were off the mark on their shots. The duo missed nine of their 10 3-point attempts as the Wizards went 3-for-21 as a team.

“We had a bad game, there’s no question,” Washington coach Scott Brooks said afterward. “We haven’t had one of these in a long time. … We’ll regroup — we’ve got a lot of confidence that our guys are going to bounce back. That’s what I love about this group, we’ve got that bounce-back ability that’s pretty good.”

Beal ranked second in the NBA with a 31.3 scoring average in the regular season but was clearly hampered by his strained left hamstring versus Boston. He scored just 22 points and was often seen grabbing at the leg or stretching the hamstring during timeouts.

“It’s as good as it’s gonna get,” Beal said after the game. “You can call me ‘one-leg bandit’ if you want. For me, it’s just going out and showing my team that I’m out here with them. I’m gonna try and be as impactful as I can.”

Westbrook’s stat line included 20 points and 14 rebounds, but he had just five assists and wasn’t in his typical top-level form.

However, Westbrook terrorized Indiana during the regular season with averages of 27.3 points, 18 rebounds and 20 assists. 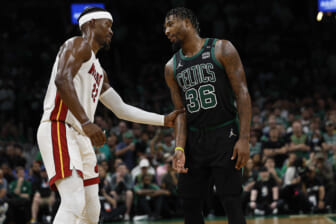 Sabonis did his best to counter the Washington duo by averaging 32.3 points, 14.3 rebounds and 9.3 assists. He recorded a triple-double of 30 points, 13 rebounds and 13 assists in the May 8 loss.

Sabonis fell just short of a triple-double in the dismantling of Charlotte as he had 14 points, 21 rebounds and nine assists.

The return of guard Malcolm Brogdon also energized the Pacers. He came back from a 10-game absence due to a hamstring injury to record 16 points and eight assists in just 21 minutes.

“I was always conscious of my hamstring,” Brogdon said. “When you’re dealing with hamstring issues, it can be dangerous, so there is a bit of hesitation when you’re out there of things you’re not gonna do. … Consciously and unconsciously, you’re thinking of stuff to avoid. But overall, I felt good. I’m glad we got the win.”

The Pacers will again be without guard Caris LeVert due to health and safety protocols.