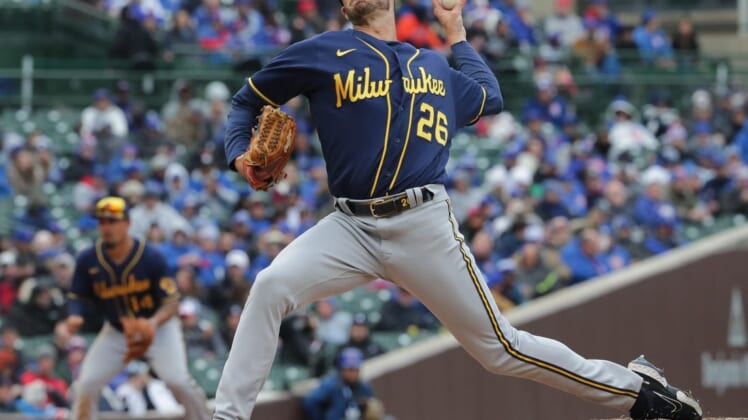 After managing a series split against the National League’s best team, the Milwaukee Brewers look to improve their play versus a rival that resides near the bottom of the league.

The visiting Brewers will aim to win consecutive games for just the second time this month on Friday, while trying to avoid a third straight loss to a Chicago Cubs team that’s played well of late.

In the mix for a fifth straight postseason berth, Milwaukee has averaged 3.4 runs in its last 16 games while winning just six times. However, it homered three times and pulled out a 5-3 home win Thursday to salvage a four-game split with the Los Angeles Dodgers.

“We’re in a position, like most teams, where wins are really impactful,” Milwaukee manager Craig Counsell said. “You try to stack up wins. That’s our job.”

The Brewers, who last won back-to-back contests Aug. 9-10, now head out for six straight on the road, where they’ve dropped nine of 12. Milwaukee is also 6-7 this season against the Cubs, including 3-4 at Wrigley Field.

Though 17 games under .500, Chicago has won its last four series and, following Thursday’s 3-2 victory at Baltimore in a makeup contest, three consecutive games and nine of 13 overall. The Cubs have also won seven of nine at home.

Perhaps the best outing of the season from scheduled Milwaukee starter Aaron Ashby (2-10, 4.24 ERA) came during its 3-1 win at Chicago on May 30. The left-hander allowed only a Willson Contreras homer, four other hits and two walks, while fanning a career-high 12 over six innings.

Milwaukee has won only once over Ashby’s last 11 starts, July 8 versus Pittsburgh. However, Ashby has a 3.22 ERA in his last four starts. In his last outing, he yielded two solo homers with one other hit, while walking two and fanning five, over six innings of Milwaukee’s 6-3 loss at St. Louis on Sunday.

Contreras, who homered twice Thursday, has gone deep twice while batting .313 versus Milwaukee this season and is 2-for-3 with three walks lifetime against Ashby. Teammate Franmil Reyes is batting .382 (13-for-34) with two homers and five RBIs while hitting safely in all eight games he’s played since joining the Cubs after being released by Cleveland earlier this month.

It’s a marked improvement for Reyes, who batted .213 with nine homers in 70 games for the Guardians.

“Everybody knows me and knows — when I’m good — what I can do,” Reyes told the Cubs’ website.

Chicago hopes for a better effort from scheduled starter Keegan Thompson (9-5, 3.67 ERA) after he allowed four runs off a three-run homer, one other hit and three walks in just 1 2/3 innings of an 8-5 loss at Cincinnati on Sunday. The right-hander has alternated poor and strong performances while going 2-2 with a 5.70 ERA in his last five starts.

Thompson, though, has yielded just three runs — one earned — and nine hits, without a walk, while striking out 10 over 13 innings to win his last two home starts.

Milwaukee’s Andrew McCutchen struck out in his lone at-bat versus Thompson and is 4-for-46 against the Cubs this season, but homered twice Thursday.