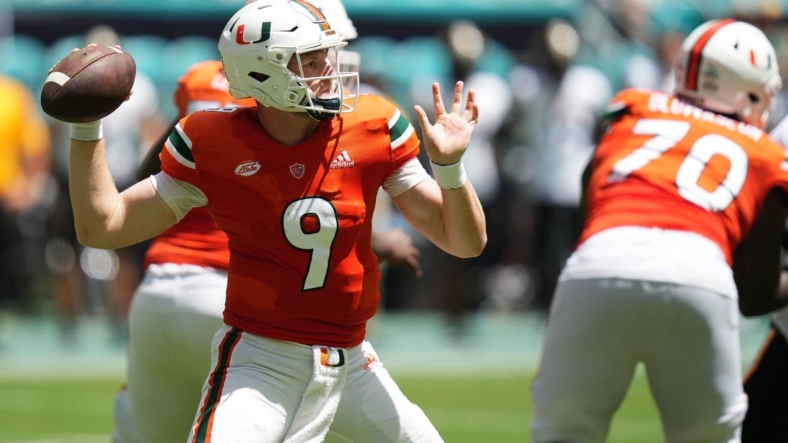 The heat will be on Saturday night when No. 13 Miami visits No. 24 Texas A&M at College Station, Texas.

Texas A&M (1-1) is coming off a humbling home loss to a mid-major squad, falling 17-14 to Appalachian State last weekend.

That loss sent the Aggies tumbling from their previous ranking of No. 6 in the nation. It also left coach Jimbo Fisher contemplating a switch at quarterback after Haynes King led the offense to just seven points in the loss, not counting a special-teams touchdown.

LSU transfer Max Johnson and true freshman Conner Weigman are the options if Fisher is intent on making a change. Center Bryce Foster is expected to return Saturday.

Miami (2-0) moved up two spots in this week’s AP poll following a 30-7 home win over Southern Miss. The Hurricanes trailed 7-3 in the second quarter and led just 10-7 at halftime before running away with the victory.

The trip to College Station will be the first major test of the new coaching staff, led by Mario Cristobal.

When Fisher was at Florida State from 2010-17, his Seminoles played polished football against Miami, going 7-1 in head-to-head meetings.

Now, though, Fisher has some issues to address after Appalachian State dominated time of possession against Texas A&M, holding the ball for nearly 42 minutes to 18:31 for Miami.

If there’s a true strength for the Aggies, it’s kick returner Devon Achane, who scored last week on a 95-yard race downfield. Achane also ran one back 96 yards for a touchdown last year against Alabama, giving Miami a keen area of focus on special teams.

Asked about the Hurricanes, Fisher emphasized the challenge.

“They’re a great team,” he said. “Their quarterback (Tyler Van Dyke) is dynamic.”

Van Dyke, projected as a first-round NFL draft pick next year, is coming off a shaky first half against Southern Miss. He rallied in the second half and finished the game 21 of 30 for 255 yards, one touchdown and his first interception of the year.

“I missed throws that I never usually miss,” Van Dyke said. “I make those throws in practice all the time. My mechanics sometimes get a little bit too low.”

Van Dyke also was sacked four times, which he attributed to some issues on the offensive line labeled blocking “miscommunication.”

Miami running back Henry Parrish Jr. enters off two consecutive games of at least 100 yards. The Aggies are familiar with Parrish from his days at Ole Miss.

Miami’s top receiver is Xavier Restrepo, who operates out of the slot. He leads the team in catches (11) and receiving yards (172) and has averaged 15.6 per catch.

The Hurricanes also got back left tackle Zion Nelson and running back Jaylan Knighton from injury last week. Both were on play counts but could be full-go this week. Nelson is a possible high-round NFL talent, and Knighton led Miami in rushing yards (561) and total touchdowns (11) last year.