In return from long layoff, Colorado holds on to beat Washington St. 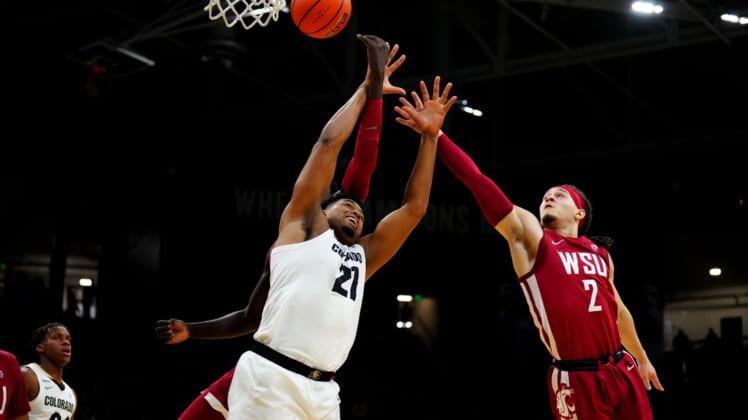 Evan Battey scored 20 points and Elijah Parquet made a crucial driving layup in the final minute to help lift Colorado to an 83-78 Pac-12 victory over Washington State on Thursday night in Boulder, Colo.

Colorado had taken a 71-63 lead on Barthelemy’s three-pointer from the right side with 4:55 to go. But WSU’s Dishon Jackson scored on a power move to cut the lead to 71-68 before Battey’s three-point play put the Buffaloes ahead 74-68 with 3:28 to go.

But Colorado responded quickly. Walker hit a jumper in the lane to start an 11-0 run. Battey made a steal and passed ahead to Julian Hammond III for a layup to put the hosts ahead to stay, and Battey’s stepback 3 increased the Buffaloes’ advantage to 62-58 with 9:59 left.

Both teams were surprisingly crisp on offense in the first half despite not having played since before Christmas. The Cougars, who had not seen action since a loss to Boise State on Dec. 22, shot 46.7 percent from the field in the first half and led 38-32 on two foul shots by Michael Flowers with 43 seconds left before settling for a 38-37 advantage at intermission.

Colorado, which hadn’t played since defeating Cal State Bakersfield on Dec. 18, hit only 39.3 percent from the field in the half but made up for by making 12 of 13 foul shots.

Colorado freshman guard K.J. Simpson, who averages 6.4 points, left the game with 6:43 to go in the first half. He was helped from the court after Mouhamed Gueye blocked his shot from behind and made contact, but no foul was called. Simpson returned to the bench for the second half but did not re-enter the game.