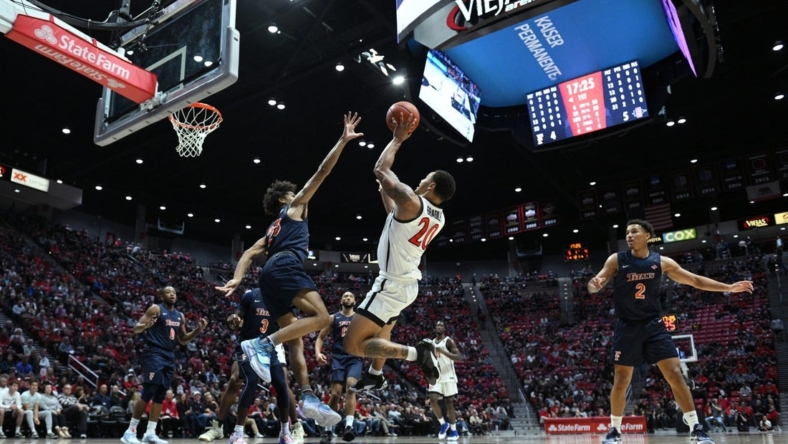 Darrion Trammell had 18 points and three steals to help No. 19 San Diego State to a 80-57 win against visiting Cal State Fullerton in the season opener for both teams on Monday night.

Vincent Lee scored 11 points to lead Cal State Fullerton, who returned four core players from a team that reached the NCAA Tournament last season. Jalen Harris scored 10 points and Latrell Wrightsell Jr. scored all eight of his points in the first half for the Titans.

The Titans trailed 32-25 at halftime and pulled within five twice early in the second half, but the Aztecs strung together a 13-0 run to take their biggest lead at 47-29 with 16:18 remaining.

Lee ended the run with two free throws, but San Diego State continued to pull away, moving ahead 56-32 on a 3-pointer by Micah Parrish with 13:17 remaining.

Trammell made a 3-pointer 13 seconds into the season and the Aztecs jumped out to an early 5-0 lead.

Mensah made a jumper to give San Diego State its first double-digit lead at 19-8 with 9:38 left.

The Titans put together a 6-0 run to trim the deficit to 19-14, but Adam Seiko sank a 3-pointer for the Aztecs to end the brief run.

San Diego State extended the lead back to double digits once more in the first half on two free throws by Trammell that made it 30-20 with 1:18 left, and the Aztecs eventually took a 32-25 lead into the break.